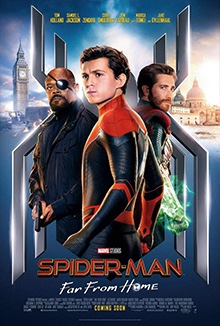 After the Amazing Spider-Man films ended up failing hard, his MCU incarnation had a lot to live up to. Tom Holland’s version first debuted in Captain America: Civil War and showcased him as the bumbling socially awkward teen who tries his best to balance school and his super hero life all while keeping his identity a secret. Spider-Man: Homecoming was…serviceable. It wasn’t an amazing movie by any means but it did introduce Peter Parker nicely.

Fast forward almost three years later and we have Spider-Man: Far From Home. It takes place after the events of Endgame (so if you somehow haven’t seen it yet, now’s a good time to do so) and follows Peter trying to live a normal life in the aftermath of the snap (this movie refers to it as “the blip”).

So how does this film fare? Let’s find out.

After the events of Endgame, Peter is back home in Queens where he tries to live a normal life. However, he discovers his class is heading on a European tour. But when he thinks he’ll finally be a normal kid, a mysterious elemental being wreaks havoc all across the continent. As he tries to stop the amorphous being, a strange man who claims to be from another universe appears to stop it. However, this “Mysterio” has some hidden secrets of his own, one that could put Peter Parker in danger.

As far as MCU films go, this was probably one of my favorite ones. My main issue with Homecoming was how often Peter felt inept and while he is still a bit of a socially awkward teen, it felt like all of the world was against him. That and the movie felt like it was too hard to be left-leaning at times, so it kinda fell flat. This one seems to fix many of the issues I had with the last Spider-Man film and it was a vast improvement.

Mainly that the story had a nice flow to it and was better developed than the previous entry. You could argue that Peter Parker was finding his footing in Homecoming, but he’s matured fast here. I’m sure him being snapped might have made a powerful wake up call for him, and a much needed one at that.

Worth mentioning that Mary Jane (played by Zendaya) felt a bit like a straw SJW in the last film. Most notably, she brought up during their trip to DC, that she “wasn’t interested in monuments from slave owners,” which was a common topic amongst the left. I have thoughts about them, but maybe another time. The point is, that kind of character is non-existent here. She’s more of a subtle history nerd who knows these obscure facts about history.

She also seems more calculated and less “disinterested” this time. She has a lot more character development this time around, especially between her and Peter. I did wish she could have done more, now that the spotlight is also on her. Perhaps she could have contributed to Peter’s effort against Mysterio in the final battle.

Speaking of, Mysterio has become one of my favorite villains in the MCU, which they’ve been nailing latelt between Thanos, Killmonger, and so many others. He has a history with Tony Stark and isn’t so much a super-powered hero, but an illusionist using some Stark Technology to create surreal illusions that would give Doctor Strange a run for his money (in fact, Aunt May actually assumed he WAS Doctor Strange.

He’s probably one of more interesting villains. He’s not particularly evil, but has a messiah complex that makes him believe that he’s the newest hero, but simply wants to overshadow Iron Man. He’s also very manipulative and becomes one of the more dangerous villains. I loved Jake Gyllenhaal’s performance and became an instant fave of Mysterio.

In fact, the character development was much better than the last film. I felt the way the characters handled themselves around Peter made them feel more reasonable and understanding than being almost like a jerk. Even Nick Fury was understanding in that while Peter has talent as Spider-Man, he wasn’t ready to succeed Tony Stark in his eyes. As a result, even when confronting Mysterio, which made for a wild cinematic experience, he wasn’t able to handle his illusion powers, until the end anyhow.

Before we wrap up, I at least want to discuss the post-credits events. It features a doctored video where it makes Spider-Man seem like a mass murderer, taking out Mysterio and killing innocents (even though that wasn’t what happened, which is the point). And as a result, we get the debut of the Daily Bugle, the iconic newspaper publication from the comics and past Spider-Man films.

What’s notable about this time around was that Spider-Man was the villain while no one knew about Peter. This time, the world knows who he is now because of the news company. Which makes me curious as to the fate of Spider-Man in future films. Perhaps Spider-Man becomes a vigilante and tries to stop whoever is responsible as well as try to clear his name.

Overall, though, this was easily one of my favorite Spider-Man films and really does the series justice. While it’s not as good as Into The Spider-verse, this is an awesome film especially in the MCU canon. Do check it out when you can.