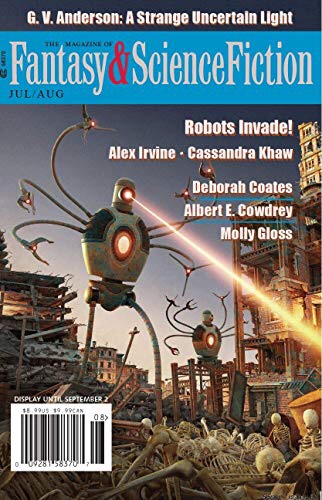 You ever look for a story and you immediately pick it up because of the title. Well, sometimes, short fiction is like that as well. You see an awesome, hilarious title like, The Legend of Wolfgang Robotkiller, and you wonder what the heck that story is it about. Obviously it involves robots and killing robots, but what else? A lot, actually.

Today’s story is The Legend of Wolfgang Robotkiller by Alex Irvine, as featured in Fantasy and Science Fiction Magazine. You can find it here. This is it’s 70th Anniversary, which is awesome that a print magazine can last in this day and age, so here’s to many more. So, let’s begin.

Robots have invaded the world. Society has fallen. And the only thing that can stop them is an unknown hero named Wolfgang Robotkiller, who is more than we might think. Literally.

I’m gonna stop there, because this is a story that truly lives up to its awesome name. The title reminds me of an old City of Heroes character I created, a Super Strength/Invulnerability hero named Robo-Killer, this badass looking bald cyborg straight out of a comic book. While the hero isn’t as epic (I’ll get to that later), this story is amazing. It’s truly what anyone would want in a survival sci-fi story about a robot invasion. If I were a kid, I probably would have loved this story. Now that I’m older, I caan appreciate my inner nerd, which is what this is all about.

This is a nod to the many B-movies of old. The Day The Earth Stood Still, War of the Worlds, Something-Whatever From Outer Space. Wolfgang Robotkiller seems like the type of guy who would feel like the Terminator mixed with Chuck Norris. Someone who could take down giant robots by himself and enough to have a song made about him.

But the reveal is even more amazing. I don’t usually spoil stories like this, but I felt it’s necessary, plus it’s a short enough story anyhow that I can discuss it. You know the trope “Wrong place at the wrong time.” That sums up this hero, the mythical legend. He’s about as typical as the mouse I use for my Laptop. He’s an ordinary guy who can somehow do extraordinary things. He has no powers, no martial arts skills, no god-like strength, just some random dude who somehow survives in this mess. I love it, and really, he’s the hero many could look up to. Not the overly muscular dreamy example of a male or female superhero, just some average Joe kicking robot ass. It felt weird, but it worked out in its favor because it felt so realistic in this scenario.

The story itself feels very B-movie-ish as well. Five people are surviving a world torn by robots and discover old relics. Almost like an Attack on Titan scenario with robots. In fact, the way Wolfgang kills one robot reminds me of the 3D Maneuvering gear from the show, just without the blades and the neck slashing. It’s an awesome concept and I can see this be its own thing, perhaps a longer story that focuses more on this Wolfgang guy than in the story. And yet, it feels like the perfect length. It’s around 4,000 words and it feels like a full story in that regard. The climactic battle felt just as epic and the reveal was solid. It didn’t feel out of place for that world. It wasn’t some random kid or animal, it was an ordinary dude who decided to be a hero.

Honestly, this might be one of my favorite short stories so far. It’s the perfect length, plenty of humor, action, nerdy feelings. One that could be adapted into a comic book or something. While the main characters weren’t all that interesting, the real protagonist was Wolfgang Robotkiller, a man who lives up to his name. Truly an icon who could save civilization. If only we could see more of his adventures and defeat the robot invasion once and for all.

+ A powerful story all the way through.