Fiction Friday is a series where I talk about what I’ve been reading. Short Stories (and sometimes Novellas) are featured as in-between posts and the first Friday of the month will feature a new novel review. Today, I review The Letter Mage (First Quarto) by Alexandra Penn. 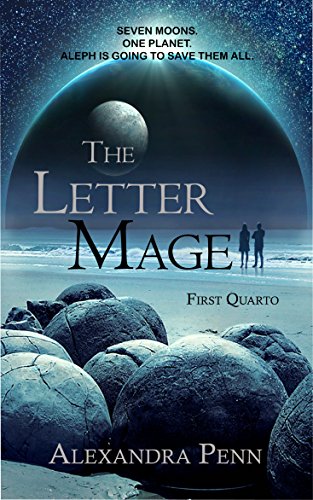 (This was the story I chose for #IndieApril a few months back. Apologies for taking so long to get to it, but here we go.)

A science fantasy world with espionage, magic, and a kid who didn’t mean to be a villain.

Today our novel (novella, really) is The Letter Mage by Alexandra Penn. You can buy it here. This is a pretty short tale, because it’s more or less what I refer to “season one” of a much larger tale. So far, there are 4 books (quarters if you will) in the series. In hind sight, I probably should have read them all, but maybe someday, there’ll be a follow up where I review the entire thing.

Anyway, let’s get into it.

The story follows Aleph Worf-Sapir, a future Letter Mage enlisted to a college exchange program with another moon society. However, a mysterious incident places his future at risk. A mysterious organization as well as a supposed villain, Alexander Normal, and not to mention a conspiracy that would place the entire universe at risk.

As far as the story itself, it should be read as one series, which is an interesting concept. So I might go in just reviewing the one story and acknowledging that fact at the same time. Anywho, this story definitely showed some promise. While we didn’t see a lot of magic this “season,” it has an interesting enough concept. It’s nice that the rules of magic are explained in part of the story, that way, it can’t be abused for plot purposes.

While a lot happened, by the end, I had more questions and very few answers. Again, this is meant to be read as a single series, meaning all four books have to be read. It does beg the question why all four books couldn’t be formed into one since it didn’t seem to be that long anyway. I am intrigued by the story, but it did feel like a preview than a standalone story. While the plan leaves a lot to be desired, it grabbed me enough to find out about more.

Aleph has an interesting personality. He states at the beginning that he didn’t mean to become a villain, which ties into this mysterious green-haired kid, Alexander Normal, a spy hired by his father to steal secrets from the university on the Prismatic Moon with a Kung-Fu style rank system that had rainbow colors, and each rank varies in difficulty and presitge. I enjoy the magic system in this story and find it to be one of the more unique concepts. It’s not based on elements like most magic, but rather anything they desire. And having powers unique to one person reminds me of One Piece with its devil fruit concept and how their powers are tied to whoever eats the fruit (only without such a fatal drawback, being unable to swim in a ocean-heavy world).

The motherly duo of Pala and Esp, Aleph’s mothers, are probably some of the most interesting parents I’ve seen. Calm, collected, only using Aleph for their own purposes from the looks of it. They claim they care, but how much remains to be seen. They do have good chemistry, one being serious while the other is motherly enough to keep secrets from her wife. I felt more excited seeing their interactions which is rare for a duo who are essentially in a supporting role compared to Aleph and the others. I’d love to see more throughout this series.

Being short enough, there’s not much to say, but I do want to bring up one remaining plot point. Sexism. Specifically towards Aleph, the male of the story. It begins with Herschel, who walks into Aleph’s home like she owns the place and consistently talks poorly about Aleph and his gender, much to the ire of Esp and Pala. Granted, Aleph replies like any kid would, but she does warm up to him once she explains her story and why she arrived on their moon.

And then there’s the Prismatic Moon, whose school consists of the science fantasy equivalent of an all female private school. The basis of light magic, the magic prismatic students rely on, can only be performed by women because, and this is according to the story, that women have more complete life because they can create it. Men have half because they don’t have this capability.

Basically, men can’t perform their magic because they’re men. Now, I have a power system that works similar to this, and does incorporate gender, that being that females in Eifalia are more connected to the arcane, while the males are more adept with Inner Focus, physical magic. But there is crossover and neither side is outright forbidden. Females can have strong physical talent and males can be powerful magi. I could understand if men would be weaker as a result since they’re dealing with a unique magic system “Letter Magic and Light Magic” but outright excluding them seems…

Granted, the story basically forces Aleph to prove his useage of light magic, but it does perplex me why Aleph would be sent here at all knowing that he wouldn’t last. It seems like a strange plot point considering magic is commonplace and even though “Anyone can access the light” it immediately breaks the rule by claiming that men aren’t “anyone” in the eyes of the prism mages.

It felt unusual to see since it’s determined by biology rather than any sort of magic force like mana that could be attributed to gender (women being more magic capable than men for example). I would have to read the rest to see where this would go, but it feels more of a cop out than anything natural. An excuse rather than something that could be caused by an internal force not tied to biological matters.. Like, of course Aleph would be the exception to this rule. He’s gonna try no matter what. And this isn’t an ability no one has mastered before. If anyone can use the light, then ANYONE should use the light. It shouldn’t be up to human thought to determine what it means, but perhaps that’s the point of this moment.

At the least, they acknowledge it. Aleph notes many times how sexist Herschel was towards him (and his moon by proxy) and the rest of the students were blatant about it. It is a notable plot point to be referenced by Aleph, the narrator and the character. Not sure how much it affects its place in the story, though.

(And yes, I ESPECIALLY would have taken issue with it if Aleph and the students had their genders reversed.)

This story definitely shows promiser despite it’s faults and I love to see more from it. I will have to review the series as a whole (and I am referring to it as “Seasons”). Overall, this is a fun story that I’m looking forward to see more of. Yeah, the Prism college is a bit off putting, but it’s still a fair story overall.

Score:
+ A good take on the science fantasy genre
+ Two wives with determination and cunning.
+/- Short, but part of a larger serial
– The sexism towards Aleph wasn’t handled as well.
– Ends abruptly rather than an isolated ending connected to part two.