My first novella, City of Kaiju, is finally out! Available through Amazon and Books2Read. You can see a preview of the very first chapter here. Help support a fresh new author with a fantastic read this spring season.

Fiction Friday is a series where I talk about what I’ve been reading. Short Stories (and sometimes Novellas) are featured as in-between posts and the first Friday of the month will feature a new novel review. Today, I review A Most Practical Imperative by Joe Taylor. 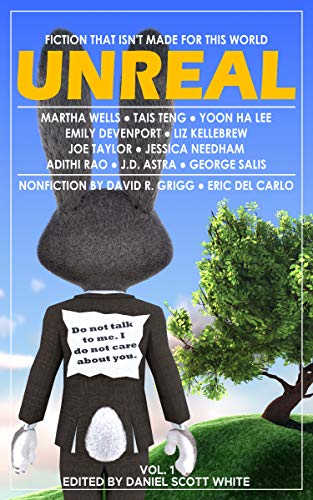 Time for something different. It’s another new magazine, freshly printed and just as mysterious. Today’s story is a Most Practical Imperative by Joe Taylor, as featured in Unreal Magazine. You can find it here. This is the magazine’s first issue. They managed to follow me on Twitter and I figured I’d give it a look and hopefully give their cover story a good review.

So let’s check it out.

The story focuses on an aptly named Peter Rabbit, not to be confused with a certain kids icon, this rabbit is followed by an unnamed man, who to him doesn’t deserve to be named, but he ends up pummeling him and forces him to wear a placcard that says “Do not talk to me. I do not care about you.” However, Mr. Rabbit has offended his boss and now must follow his orders.

This story truly lives up to the magazine’s name. We have a character named after a famous rabbit, who is a stock broker on Wall Street, deals with a Romanian, maybe a German, man, and is so upper class that it makes his namesake bunny look like a hooligan. It’s a very classy tale and is weird enough to be serious about itself like something out of Alice in Wonderland.

It’s also curious that he manages to go along with it. The reasoning is that kindness is dead and his boss doesn’t take kindly to willingly ignoring his old friend. As a result, he’s forced to wear a placcard on his back that forces him to be distant against his will, but if he’s antisocial anyway, then he knows he has the upper hand.

It’s a story that makes you think about what’s going on and does so in an intriguing way. Why is Mr. Rabbit going along with this. Why doesn’t he explain who this nameless man is? Why does he wear a placcard instead of outright killing him. And most of all, why is a rabbit trading stocks on Wall Street and partakes in regular viewings of ESPN?

It’s kind of a fun situation. It has this off the wall, yet takes itself more seriously than it has any right to. I actually love stories like this because this story doesn’t care that it’s unrealistic. The story itself is simplistic and admittedly confusing, but who cares, right? It’s the execution that matters, and it works.

The story is from Mr. Rabbit’s perspective, and he’s very full of himself down the the very end. He cares little of his human neighbors and seems to go along with everything despite getting the crud beaten out of him. It does give him some deep reflection as he goes about his day realizing just how antisocial he is, and how he tries to rectify that. It’s interesting to see him go about his normal life with a nasty Romanian/German on him in a world filled with chaos.

That said, it is a little too off the rails since it explains too little. Perhaps that’s the point, but I feel like understanding why a rabbit would work alongside humans and undergo this task could be a bit clearer. Also, I felt the ending could have been a bit more satisfying since it ends somewhat abruptly.

Other than that, it was a curious tale. I can’t wait to see what more this magazine has to offer. It definitely was Unreal to say the least.

That’s all for today.

+ Alice in Wonderland-style weirdness
+ Too serious for its own good, yet is pulled off convincingly
– The story felt a little disjointed in places
– Elements are unclear

4 thoughts on “Fiction Friday: A Most Practical Imperative”