My first novella, City of Kaiju, is finally out! Available through Amazon and Books2Read. You can see a preview of the very first chapter here. Help support a fresh new author with a fantastic read this winter season.

Fiction Friday is a series where I talk about what I’ve been reading. Short Stories (and sometimes Novellas) are featured as in-between posts and the first Friday of the month will feature a new novel review. Today, I review Through The Doorways, Whiskey Chile by S.H. Mansouri.

Time to switch things up. This time, we have a frog as the main protagonist. Well, kind of, but it’s strange and gloriously satisfying as you’d expect. 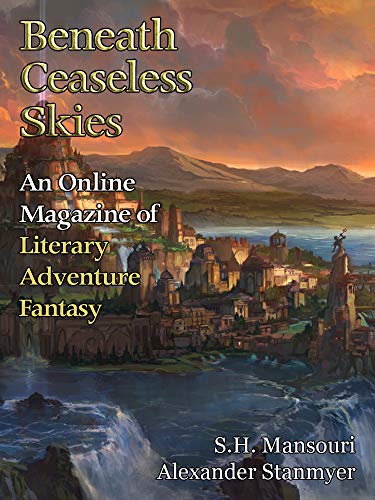 Today, we’re reviewing Through The Doorways, Whiskey Chile by S.H. Mansouri, as featured in Beneath Ceaseless Skies. You can find it here. If you like a lot of weird nonsense with gunslingers, magical doorways and a frog that can breathe fire, this one will be perfect. Now, let’s jump into the magic.

Where The Doors Lead

The Whiskey King rules over all. In his alternate dimension, he is the key to the mysterious death of Brady’s Mother. Now, it’s up to him and his fire-breathing bullfrog to navigate through the mysterious doors through Whiskey Chile and find the one responsible for his mother’s demise. Little does he know that Brady and the Whiskey King are closer than they thought.

I’m a huge sucker for alternate realities. Think of something like Alice in Wonderland, where the rules of logic never apply and the creator can do as he pleases, whether it makes sense or not. Want a world inside of a creature’s mouth drenched in gunpowder with a train rolling by? No problem. A casino in an off part of the plane of existence? No problem. I love the concept of alternate realities.

This story handles the concept pretty convincingly, which I’d imagine is hard to get through in text form rather than visual. Even making such an odd world make some level of sense must be challenging. As far as the story goes, it gets twisted from the very beginning. We see the world from Jeremiah’s POV, a bullfrog who only communicates through croaking.

This is a smart choice. He could have gone with the typical talking animal (like my rabbit mascot or Bennie from City of Kaiju. Hint hint) but he chose not to. It makes the connection between the two much closer. Plus, he doesn’t even need to talk. We get to hear his thoughts and view of the world through the frog’s eyes. I do find it unique that the frog is the POV source and not Brady. No doubt either one of them would be a good choice, but having Jeremiah be front and center really gave it a unique world. There have been a few stories I’ve seen that have that animal POV, such as A Dog’s Purpose, but this added that special feeling to it. No doubt a frog seeing its human friend enduring such a mind-bending world and yet the frog, perhaps oblivious to the world around him as far as logic goes, is there to defend him.

Jeremiah is also capable of breathing fire, as I mentioned. Something about frogs and breathing fire is something familiar to me, but I can’t quite place the origin. It’s always such a fun concept to see such animals capable of unnatural feats like this. No doubt a fire-breathing frog would be pretty cool to see, plus, he seems at least intelligent enough to not only be telling this tale but to act in such a way as to guide Brady, almost like a dog.

As for the story itself, it was super fun and again, it’s a clear beginning, middle, end, stories I love to see. It’s like watching an hour-long special on TV, you get some sort of satisfaction seeing a grand tale unfold without ending abruptly or having too little to offer. Plenty of stories are so short, they’re only one sequence and that’s it. These stories, to me, are short stories. Actual stories to tell and follow. No doubt the characters are few and far between, but that’s okay. Because it’s easier to invest time and effort into a few memorable ones rather than a dozen or so and only two stand out.

The writing has that western feel. Brady is a gunslinger or a cowboy if you prefer, and has an attitude bigger than his heart. He seems harsh at first, but it’s his determination for finding out how his mother died that sends him on this grand adventure. And no doubt the two make quite a team. I want to see more of this duo someday. I love the dysfunctional duo concept where an unlikely pair saves the day. A gunslinger and his bullfrog. What more could you ask for?

This is a wonderful story that really pulls you in and doesn’t let go. It’s a long one, but it’s worth it. Do check this one out if you love strange worlds, cowboys, frogs, and a really good fantasy tale.