My first novella, City of Kaiju, is finally out! Available through Amazon and Books2Read. You can see a preview of the very first chapter here. Help support a fresh new author with a fantastic read this winter season.

Beyond the Stars is a series of Science Fiction related posts where I discuss different aspects of the genre and review movies and shows associated with it. Today, I review Alita: Battle Angel, from 20th Century Fox and Lightstorm Entertainment. 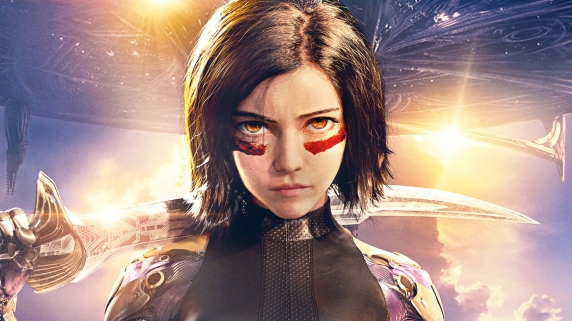 Much like video game movies, anime movies are often criticized for being too unrealistic, too cartoony, and most of the time, really bad. We do have the Detective Pikachu movie, which seeks to shatter both these droughts, but there’s one that seems to be one not many are talking about. Alita: Battle Angel, based on an OVA released in 1993 about a battle hardened cyborg who wishes to discover who she is and what her purpose is in this futuristic life. So, let’s get into it.

The world is divided into two sections. Iron City, the slums where people do their best to make ends meet, and Zalem, the city in the sky where the most prestigious of those reside to look down upon the insignificant fools below. Dr. Ido was traversing the scrapyard when he finds a fractured body of a long forgotten cyborg that is still alive. The doctor names her Alita, after his daughter. While Alita goes about fascinated by life and meeting the people of Iron City, such as the motorball fanatic, Hugo, she discovers that Dr. Ido has a dark secret: he’s a Hunter-Warrior, a bounty hunter who takes out known criminals to make money. Once Alita decides to become a Hunter-Warrior herself, she realizes just how dangerous this world truly is.

This movie was, in a word, stellar. The effort to follow the original OVA and the manga it was based on was similar that even fans of the 1993 anime can appreciate the effort that went into it. And it follows the source material as if it were a proper adaptation. Hitting all of the key points. I checked out the OVA to be sure and I was stunned at how closely the movie followed the source. Right from the start, they followed Rusty Angel as closely as possible, and it was almost like spoiling the OVA for me. I recognized so many names and so many scenes that I pictured in my head how it went in between both versions. There was an addition of Motorball, Alita’s relationship with Hugo and a few scenes toned down for that PG-13 rating (the anime is much more violent), but as far as the story, it was spot on.

I was honestly impressed at the level of detail. I mean, Alita isn’t exactly a well known IP. Sure, I’ve heard of it prior to the movie’s announcement, but this is such a big risk for Hollywood. Even when they adapted All You Need Is Kill to Edge of Tomorrow, I felt it was a fair effort. But neither were big-name properties, especially since this is going up against Captain Marvel (which I will have a review for in April after I see the film).

Just to be clear, Alita: Battle Angel was an obscure OVA from the early 90s dubbed by Manga Entertainment in the UK, and barely made it to stateside here. It’s not like Pokemon which is a huge property, but even then, I admire Hollywood going after smaller IPs and making it work, knowing their track record with anime films. Especially since Dragonball Evolution was the gold standard of bad anime films. And most of them weren’t great. I’m surprised this was made at all, really.

Okay, back to the film itself. Starting with the main crew, I loved Alita and I loved Dr. Ido. Alita has become one of my favorite female characters to date and a good example of one done properly as opposed to a prop for the male lead. Hugo had a role, but Alita was at the forefront, kicking ass and taking names. Dr. Ido is probably the highlight, being that caretaker father to Alita and having a chill attitude. He’s not super restrictive, only giving Alita a curfew, but naturally she breaks it and we see the doc in all his glory.

To be clear, I love bad ass grandpas, and his design, the black trench coat, the fedora, the rounded glasses, the massive Reinhardt-like hammer. Everything about him was executed so brilliantly, he’s become one of my favorite movie characters alongside Alita herself.

I have to at least bring up her design. It isn’t a human actor, but rather a motion-capture guy portraying Alita’s character. No regular human has eyes that big and no doubt those gymnastics were carefully edited too. I have…mixed feelings about this design choice.

On the one hand, this design is perhaps the pinnacle of CGI. It looked pretty convincing considering she wasn’t real. Occasionally, you’d get the realization that most of them aren’t real, but you could also argue that she’s mainly a cyborg and her design was made like that in mind. I’m sure it wasn’t much like Blade Runner 2049 (which did have better CGI at the end of the day), but it was a pretty admirable effort.

On the other, it did cross into “it’s CGI” terrIdory. If you don’t know, the term “Uncanny valley” implies a 3D figure looking too realistic that it comes off as fake. While I did get that impression occasionally, it is better than most I’ve seen. It kinda comes off as a video-game character from a Square Enix game in the real world.

The design did get some mixed reception, which makes me wonder why they went with it at all. No doubt it was purely for the anime-vibe, what with the big eyes and all, and it did make me cautious about it, but since most people I knew loved it, I figured I’d give it a shot and I kinda felt fine with it overall. I did get used to it and it wasn’t so goofy that it took me out of it.

Some of the others, like Grewishka were part of the CGI cast, and considering the aforementioned character is a humongous character, no doubt they had to make him look convincing.

But it wasn’t laughably bad, and that’s important. It looked convincing enough that it gets a pass, and to me, that’s the make or break part of this film, and I think it handled it nicely.

I went into this film thinking it would be a halfway decent movie, especially from a lesser-known IP. Instead, I came out satisfied that we not only got an amazing adaptation of an obscure OVA, but one of the best anime films of all time. That’s saying something in an age where many fear an live-action anime being good. Considering that 20th Century Fox was behind this, and considering their track record with adaptations, this could have gone horribly wrong and damaged the franchise in the west. Instead, it did a wonderful job and made me a fan. It’s the least I can say for an anime adaptation.