My first novella, City of Kaiju, is finally out and now in paperback! Available through Amazon and Books2Read. You can see a preview of the very first chapter here. Help support a fresh new author with a fantastic read this winter season.

Fiction Friday is a series where I talk about what I’ve been reading. Short Stories (and sometimes Novellas) are featured as in-between posts and the first Friday of the month will feature a new novel review. Today, I review Magicmals: The Beginning by April Enciso. 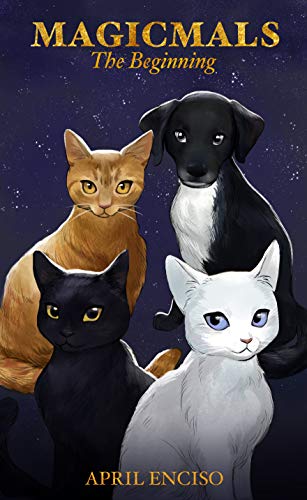 Time for some magical animal fun. I figured I’d review some younger material since I do write for younger audiences. Don’t worry, I’ll throw in the usual stuff, but for now, let’s dive into our next story.

Today’s novel review is Magicmals by April Enciso. You can find it here. This story has an interesting enough concept. Animals with magic powers are appearing, buildings are vanishing and it’s up to a ragtag buncha kids to save their town. While it’s a sound enough concept, this story has one too many problems for it to work. So let’s see the magic happen.

The story focuses on Eva and her brother Diego as they adopt a young black cat they name Puma. Since they brought him home, strange phenomena have been happening around the house, until one day, Puma reveals himself to explain that he now has magical powers. Now, they must figure out the purpose of these Magicmals and save their town from impending doom.
Seems like a fun book, no? Well, sadly, this was quite the effort to get through even with how short it was. To start, the biggest issue was the dialog. You have numerous moments of over-explaining, abuse of passive voice, and lack of contractions that make their dialog forced and unnatural. It’s as basic as it can get too. There is some personality with the humans and a few of the animals, but that’s about it.
Numerous times when a character is introduced, the characters go through this long-winded speech introducing each one. And many of them are introduced too quickly to get a huge feel of them. It’s about 70 pages. Considering just how many there are, this is a bit too much and not everyone seems to be developed enough to matter.
For example, by chapter two, we have Eva, Diego, Jenny, and Puma. Later, we add at least a character per chapter, and there’s about nine total. Now, my novella, City of Kaiju, has about two major characters lasting through at least six chapters before Kelsey is reintroduced. There are fewer characters on purpose since having a sprawling cast list is impossible in such a short environment.
Speaking of which, let’s talk about how the plot goes down. It initially starts with Eva getting a cat as a move in present. Not much seems to be happening, which is typical for most stories (need to set up and all that). And yet, she just happens to get the perfect cat. In the latter part of the book, we get buildings disappearing and the story even advertises this. I felt we should have at least gotten a nod about that. Plus, moving in is a bit cliche and overdone. Them watching the news about buildings vanishing, inevitably finding a stray magicmal and begging her mom to keep her would have worked much better.
Speaking of the mom, she seems like a very convenient plot device. She seems to have no trouble getting the heroes from point a to b and seems to be perfectly oblivious to her surroundings. You’d think she’d care a little bit about her daughter and seems to be perfectly fine with whatever they’re doing. She has little personality other than being motherly, which shows she’s nothing more than a tool to get the characters where they need to be.
The plot itself is too easy. By that I mean there’s virtually nothing stopping them. No bad guy, no evil henchmen, no natural mishap, nothing. In fact, it’s so predictable and safe that despite it being so short, it manages to be a slog reading through it what with the writing being so plain and the dialog being forced, this made for one uneventful read. I mean, imagine a story with no antagonist, and no opposing force. They solve their problems by steamrolling their way through with no way of hurdles.
Towards the end, we find out that one of the magicmals, Snowball, is the cause of these buildings disappearing. In order to bring them back, they end up on another planet/dimension/whatever and all of a sudden, we shift from modern fantasy to science fantasy in a hurry. This was one of the most jarring moments in anything I’ve read. In fact, I wasn’t even sure if I was reading the same story. Why were we not aware of the aliens prior to this? What do they have to do with this story? Could it have not been on earth? Who is this Kace kid and why do we never see him again?
That seems to be the core issue with this book. Everything falls into place perfectly. Imagine a puzzle, but all the pieces are flat, square, and can stack with no issue. Either someone has a convenient power or the plot works in their favor. There was no wall whatsoever. A conflict has to exist, either through a villain or nature itself. The closest thing we got to a villain was Gray Baby and Pookie, two other cats, but aside from off-handed mentions, they never appear at all.
And then there’s Willie Whiskas, the person who might be the biggest flaw. He knows everything, he can do anything, and he solves all of their problems without anyone else lifting a finger. Oh, you want to go back? Let me make a portal for you? Need to contact me? Just give me a call? Want to use your power? I can teach you. I’m not against all-omnipotent characters, but this was far too ridiculous for a character to have this much power.

The idea of magical animals should be an awesome feeling. A magic society, filled with mystical wonder, and a potentially evil villain tracking them down. Instead, we get a bare-bones plot, moments of pure convenience or coincidence, flat characters, and an ending that I’d rather not get into. This story is one that had such huge potential but was squashed under a story that had little effort put into making it reasonable and compelling.

When the only thing that’s positive about this story is the cool cover, then we have a big issue.

So yeah, that’s about it. Not impressed in the slightest, which is a shame because this could have been a good story. Since it’s self-published, perhaps some salvaging is in order. But I think it needs some heavy-duty editing to make this worth it.

Score:
– Bare bones plot
– Convenient plot moments
– Too many characters
– A jarring shift in genre
– Dialog was forced and a slog to read
+ Cool cover