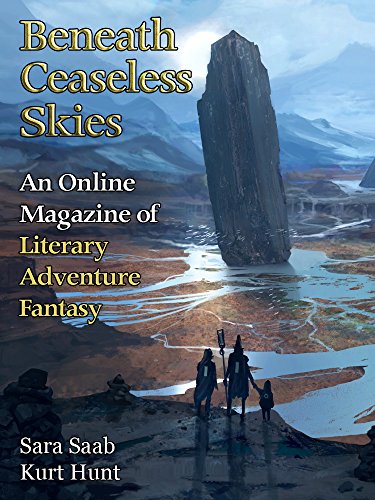 War. Genocide. These things tend to be unlikely bedfellows in our world. But what happens after that? When all is said and done, when the bodies pile up? When dealing with fantasy war, then punishment unlike anything possible would suffice.

Today’s short story is a reprint, Suddenwall, by Sara Saab, originally in Beneath Ceaseless Skies, and featured in PodCastle. You can find it here. Dealing with war, it can get pretty dark, but the aftermath and the chaos has always been a topic among war stories that often goes unsaid. Heroes come and go, but those who have to be in the middle of that. This story focuses on the darker side of that, so let’s get into it.

Suddenwalls have been popping up all over the city of Vaanat and it targets people with an insurmountable guilt. Two ex-war partners, Panette and Harvei, have such guilt when they are forced to wipe out the Ruumari, a group of people who speak in an odd language that forces the Camillonese to wipe out everyone who speaks it. When the two enlist for this war unaware of the consequences, they have to deal with the city’s unique power to trap people who suffer, eventually killing them overtime.

This is a wonderful take on the consequences of war. The idea of them living in guilt over a genocide they had no idea about would no doubt make anyone suffer. I feel this story is a nod to those who have done horrible things in war and suffered because of it. It does a good job of providing mystery with the suddenwalls and why they’re trapping the two women. Each have their own crimes to pay for and while neither of them wish to admit it, they knew this war was horrible.

The middle east conflicts come to mind, what with the regions own conflicts in addition to the US involvement in them. Killing someone over a belief is no doubt a nasty thought (even though ISIS is rightfully feared), and genocide is still common even today in most underdeveloped nations. I do like how it’s portrayed as a punishment for their own guilt, even if they do feel suffering because of it. It’s something they have to live with forever.

The story’s mystery and conflict were interesting in such a short story, though some scenes did skip a ton and felt short in some places. It did jump back and forth between present and past which I felt was a bit jarring at times. It did provide backstory to these characters and made me care for them. They’re young, they’re involved in a genocidal war, and their scars affect the city in ways never thought possible. Plus, seeing Panette and Harvei’s relationship grow is a nice sight to see.

They start off as a duo with similar interests only to not see eye to eye by the end. Without spoiling much, the baggage Harvei had compared to Panette was a nice twist. It really drove home that while soldiers have that sense of reverence and honor to them, some can be complete monsters. Mind you, this is war. It’s NEVER pretty. People are going to do bad things in the name of freedom and peace. Whether we should have been involved in certain wars is a debate I’d rather not get into, but the guilt lasts forever. They both have something to suffer for, and this story really hammers it home.

Again, the pacing did kind of go back and forth. One moment, we end up in the City of Vaanat dealing with suddenwalls, the next, we’re looking into the past about how this war began. It’s not terrible, considering it’s a short story, but I’d rather the relationship between Panette and Harvei occur in their present and with nods to the past. Maybe one past sequence could be the moment where they realized they had committed a horrible sin. Flipping back and forth feels off and it took me out at moments trying to follow along if this occurred in the past or the present.

Pacing aside, it was a great read that I’d recommend to anyone looking for a good fantasy story. Mystery, conflict, and a relationship filled with dark secrets. A nice story overall.

Score:
+ Mysterious and suspenseful.
+ Relationship between Panette and Harvei was wonderful
+ Focused on the consequences of war.
– Pacing went back and forth.