Any amazon links are affiliate links. Meaning I get revenue to those who buy from the links provided. It helps keep this site up and running and provides revenue for my projects. Help a budding author out and support the Silver Claw Inn. 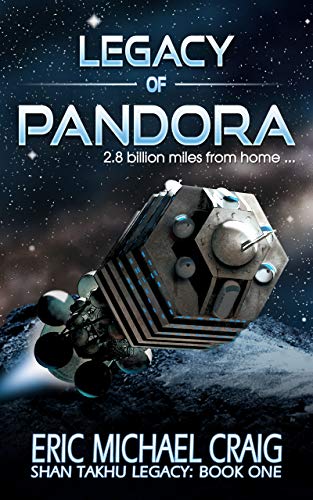 Ever feel like when you read a book, you get a good story, but at the same time, you feel a bit…strange. As if something isn’t quite there, but it’s good enough so you let it pass. Well, that’s how I feel with this book.

Today’s novel review is Legacy of Pandora by Eric Michael Craig. You can find it here. This is a hard sci-fi story, meaning it relies on logic and fact instead of making things up for entertainment. It seems believable enough, but let’s see how well this holds up.

The story involves a small crew of ice harvesters on an ordinary mission in the reaches of Neptune when suddenly, their ship is locked into place by some unknown force. The crew struggles to escape and until they figure out what’s keeping them there, they have to rely on wits. However, unbeknownst to them, they’re about to be at the center of a grand government conspiracy to oust the one chancellor who knows too much and intends to bring the Union back to it’s former glory.

As far as the story itself, I liked it overall. Had an easy pace and the content was engaging enough. I felt very interested in both sides of the plot and I didn’t really feel lost all that much. There were many interesting turns and watching all of the characters react was a nice touch.

So what’s the problem? A few things really. If you remember my review of Fire of The Fallen, as much as I enjoyed that book, it was riddled with typos that dragged the story down. The same thing occurs here. Only this time it’s mostly pacing that’s the issue. The story mostly involves two separate perspectives. Chancellor Katryna Roja and the crew of the Jakob Waltz ice harvester.

However, we get a bunch intermixed within. We get some of the villains, some of the side cast, a few of the Jakob Waltz crew. It feels like reading a Gundam-type anime where we get different perspectives. Not that that’s a bad thing, but when it comes to books, this story has too many and a few are superfluous. One scene has two side characters chatting about one character’s arrest over liquor. If this story had only focused on Katryna and Danel, this wouldn’t be a problem, plus, we’d get to see them more closely than through the eyes of these two, plus whoever is conveniently placed for this scene.

To be blunt, it kind of feels like a rough draft. Now, in it’s defense, and this is more of a positive, it’s a damn good rough. It’s clear enough that the story flows nicely, nothing seems out of place story-wise, and all of the characters have some personality to them. It really keeps you guessing throughout, which is more than what I can say for most stories like this.

Another issue is that most scenes end abruptly at the strangest of times. This story alternates between two different groups. Katryna Roja, and the Jakob Waltz crew. Considering how the story flows, I felt their POVs should be their own chapters rather than alternating scenes. It would have flowed more smoothy. Sure the chapters would have grown, but some stories have upwards of 60 chapters. This story could have easily condensed a few scenes and give more insight into each protagonist. I mean, Danel is, to me, the hero since he gets more focus than the others, while Katryna is a secondary hero alongside the main one. Having their POVs alternate seems a little random.

Now, back to the pacing, scenes end abruptly and often they end strangely. For example, we have numerous scenes where two characters are talking, and all of a sudden, it shifts over to a new POV without any set up. This felt jarring and could have used some more setup. I tend to have to imagine knowing where exactly they are and I have to fill in the gaps myself based on previous chapters.

As far as substance, well, there was a pretty engaging story aside from the issues I had. It very much reminds me of Gundam without the giant mechs and the fight scenes. It’s hard sci-fi and the author seemed to know what he was talking about with the science mumbo jumbo. (Not science-y to figure out what they mean, but I’ll take his word for it I guess) It’s about a political uprising in a world where humanity tried to escape all of that. Yet politics reigns supreme as there’s an internal coup and a conspiracy to break the union apart at the seams.

It’s a very good read, all things considered. Even if the story felt a little rough around the edges, it had a fine story to it and if it had a little more fine tuning, it would have been one of my favorite stories this year. But between the pacing and the POV issues, it falls a little short. Not to say I didn’t enjoy it. It was still a good story underneath and feels like an underrated gem.
Score:
+ Engaging Plot
+ Characters were fun to read.
+ Science/space focus a plus.
– POV switching felt abrupt in spots
– Description is lacking
– Too many POV characters/Some unnecessary
Final Score:
3/5 – Decent Story