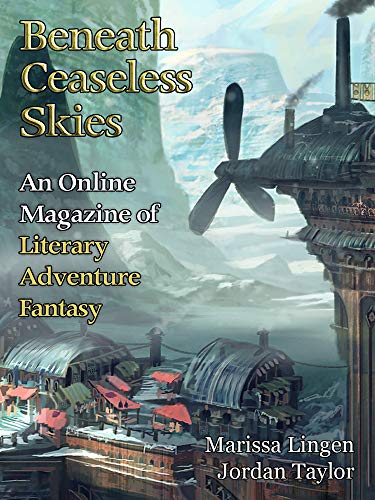 Imagine murdering someone you loved. The guilt of having it stay with you that you begin hallucinating for days until you repent your sin. That’s the theme of today’s story.

Today, we’re talking about The Deepest Notes of the Harp and Drum by Marissa Lingen, as featured in Beneath Ceaseless Skies. You can find it here (and buy here). This is a fairly straightforward tale that reminds what those who have committed horrible atrocities have to live with on a regular basis. So let’s see what’s in store?

I’m gonna try to experiment a bit with how I review things, so I’m adding a score system. I’ll point out what I like and what I didn’t like and average it out to give one final score. It can be changed as we go along, but I do feel it adds more to my reviews. So, let’s go.

The Voices Of Shame

Our story begins with Jane, who killed her sister and is fleeing for her life. She had no regrets for it since it was an event of betrayal. She then heads to an inn where voices haunt her by shaming her for what she had done. Mainly the instruments from a band that contained things she used to dispose of her sister. Feeding her to the swine spread in the forest. But when she meets another woman in Molly, they find that they had more in common than they thought.

I liked this story. I do like the type of plot where someone does something bad and instead of being charged right away, they’re on the run thinking about their crimes. I’m sure those who are locked up, even though they’re monsters in their own right, have a lot to think about. Jane was a woman on a mission, a common trope of killing her sister out of spite or just because she hated being the lesser of the two.

It feels common, but it jump starts the story pretty well. I did think that the story was going to be a flashback, but it never got to that point, which I do appreciate, since as much as I’d like context, being a short story, it went on fine without it. We don’t need to know what happened then, because it’s about what Jane is doing now.

I did find the idea of musical instruments talking to her interesting. It’s also the theme of inanimate objects and how they can be personified even if they don’t actually talk. Hallucinations and how the characters react to them are a nice touch and add to the fantasy flavor.

We also meet Molly who is also in a similar predicament. They’re also in love. You’d half expect them to go on with a plot to finish what they started, but they do their best to repent as soon as they can. I also found it interesting that no one seemed to be after them. If she did commit Sororicide, she was still a wanted woman. I would have enjoyed seeing Jane and Molly try to outrun soldiers in an effort to find a way to repent themselves. I felt it was too easy of an ending and I would have loved to have seen Jane try to survive in a world she created by offing her sis.

The main focus was Jane’s relationship with Molly and how it affected her as a person. Even though she had no regrets when it came to murder, she couldn’t accept that she committed an unforgivable sin. Perhaps the story at least could have gone on longer, with Molly trying to figure out Jane’s secret and perhaps learning that Molly has a secret as well. It could have gone a lot longer, but it felt too short for the story it was trying to tell.

Not to say I didn’t enjoy it. It was a good story that did it’s job. A soft tale of romance, criminal intent, and perhaps many secrets. The writing was wonderful, looking into Jane’s dark mentality after what she did, and the affectionate desire of her lesbian lover. I would love to see this expanded in the future, maybe making it into a full story that would make a wonderful tale. I’d buy it.

Though too short for the story it was trying to tell, I did like the overall idea and how it flows throughout. Jane is a wonderful character and I’d love to see a bigger tale between her and Molly. The runaway plot is something not often seen in Fantasy, so seeing a great one is a nice treat.

Score:
+ Runaway plot
+ Jane is a great character
+ Wonderful concept
– Could have expanded a bit more
– Ends too easily