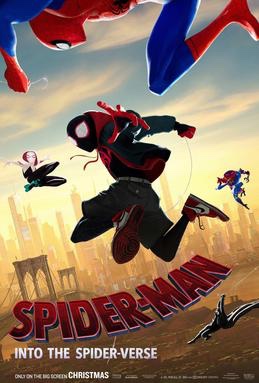 Spider-Man’s had a troubling history when it comes to cinema. The friendly neighborhood hero hasn’t had a breakout hit, even with his entry into the MCU, Spider-Man: Homecoming, and the upcoming sequel Far From Home. Even with Venom, which I reviewed already, had its fair share of problems that made it difficult for Sony to bounce back. I was cautiously optimistic when they announced the Spider-verse movie that I was hesitant about seeing it since most trailers can look awesome but the films themselves are not worth the effort.

So when I heard that Spider-verse was getting good reviews, I wanted to see for myself. Sure enough, I had a fun time. So let’s get into it and see where these worlds take us.

The story follows a young kid named Miles Morales, an ordinary kid who was accepted into a Brooklyn prep school. He didn’t want to be there and is doing all he can to be kicked out. In his frustration, he visits his Uncle Aaron, who teaches him how to go wild and have fun. In their joy, Miles is bitten by a radioactive spider, but when weird things start happening, he discovers a machine that can access multiple dimensions and with it, multiple spider-people. Spider-Gwen, Spider-Man Noir, the anime-style Spider-Bot and the cartoon-like Spider-Ham. Together, they must return to their own worlds and stop the evil Kingpin from breaking the universe before everything is destroyed.

I had a lot of fun watching this film. The animation was beautiful, employing a comic-book style pseudo-3D look, almost like an animated hand-drawn CGI film. It felt smooth and felt appropriate for the story it told. All of the characters had a cartoony style to them, most notably Kingpin, who had this no-neck, square body, kind of like Strong Mad from Homestar Runner. At one point, his suit took the entire screen and all you saw was his bald, squished head.

Everyone had their own story to tell, and each one started in this comic book style intro that discussed their past (and acknowledging a few Spider-Man memes along the way). It was hilarious to watch all of them act like big-shots and explain their history in this “get it, got it, good” tone. Especially all the random things these guys have done. It might be a bit overdone after a while, but I still found it wonderful

So this story has multiple spideys. I want to talk about a few of them because there’s a lot to discuss.

I loved this character’s story arc. He’s a kid who doesn’t like his normal life, so when he becomes Spider-Man, his life becomes a living mess as he adjusts to his power. His hands stick to everything and he has so much trouble using his new powers like stealth and a pulse attack. Seeing him go through so much and be the hero by the end is inspiring. Many of the Spider-people lost so much and Miles is no different. I won’t give it away, but he becomes such a lovable character and is as much of an awkward teen as Peter Parker was. He’s the most developed out of all of them.

Gwen was also a loveable character and just as awkward as Miles, probably more. She first meets miles and tries to take her name, only to blurt out a typically black name, but since she isn’t black, she tries to backtrack it. She does have a sense of nobility in her and is willing to fight for others. I’ve seen figures of her but I had never read any comics featuring her, but I like the character. She’s witty, powerful, brave, and willing to fight for those who can’t. She also has a cool outfit, sporting a Spider-Man mask with a hoodie. A good compliment to Miles.

Calling back to the pulp fiction era of the 1930s, Spider-Man Noir is an older spidey with a spider-sense worthy of a detective. While he’s not as active as the others, he can still be witty like the rest of them. Notably, he’s voiced by Nicholas Cage, which I didn’t know until the credits. While I’m not a fan of the actor, he did a good job in this role. Not much to say about this guy, really and didn’t seem to be as interesting as the rest of them, but he wasn’t a bad character by any means.

One of the two oddball characters is Penni Parker, who controls Spider-Bot. She’s the stereotypical anime girl with big eyes, slow movement and a lot of personality. Being from an alternate dimension, her style clashes with the more “normal” characters and shows the uniqueness of their world. While the rest are 2D/3D, she’s full 2D in a partially 3D world. Plus she’s the brains of the group and can use her bot to hold her own. She reminded me of D.Va from Overwatch in that they’re both Asian characters with mechs that they have a close bond with. She also has a love for J-Pop, like how Miles has a thing for R&B and Rap. A very relatable character.

And finally, the most notable one. The cartoon pig, Spider-Ham. Sporting a spider outfit whose nostrils also resemble eyes, he’s the most unique of the bunch. I was afraid he’d get too annoying, but I wasn’t that bothered by him. He’s funny and stands out in their world. Plus, he channels his inner Bugs Bunny and goes full cartoon at times. He was a joy to watch and really made the movie fun.

There seems to be some issue from those believing Miles may “replace” Peter Parker as Spider-Man. To be clear, no one will replace Peter. He is Spider-Man no matter what some might say. I mean, how could they ever replace such an iconic guy?

But that’s not the point. The point wasn’t to replace any one guy. All of these characters, male, female, black, white, Asian, old, young, even cartoony anthropomorphic pigs. The message at the end explained it all.

Anyone can be Spider-Man. Anyone can be a superhero. In an age where diverse heroes are becoming standard, this message needs to exist. There are those who don’t see themselves as heroes because of a number of reasons. Race, gender, social status, country of origin. In an industry dominated by white characters for so long, we need fresh new takes on heroes. People we can relate to and admire. People like Miles can prove that there is a market for non-white heroes.