Fiction Friday is a series where I talk about what I’ve been reading. Short Stories (and sometimes Novellas) are featured as in-between posts and the first Friday of the month will feature a new novel review. Today, I review A Circle of Steel and Bone by R.K. Duncan. 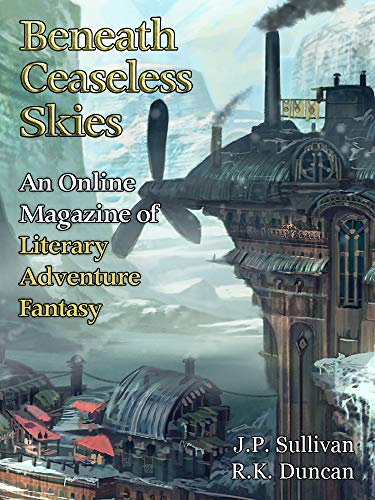 Today’s short story is A Circle of Steel and Bone by R.K. Duncan, as featured in Beneath Ceaseless Skies. You can find it here. This is a mysterious tale of evil spirits, a murder mystery, and LOTR-style battles, all in one. So let’s see what we can uncover here.

Of Steel and Bone

The story follows Meinrad, a soldier who finds one of his friend killed by some mysterious force. Many of the priests question if it was one of the villagers, but Meinrad thinks it’s one of their own. But a mysterious legend is about to rear its ugly head as the answer in this alternate history Europe might prove to bite off more bark than they can chew.

This was overall, a good story. I do enjoy stories that have this grand sweeping worldbuilding intermixed in our own history. Made me feel like I was in another world, even if it was my own. The world building is good, even for such a small story. The mysteriousness adds to it as well. There were plenty of myths in the Medieval era (Like dragons), but it was still nice to see. That said, I felt the story wasn’t clear at the start with how mystical beings were involved.

The story opens with Hellemar’s body cut but never bleeding. As if a vampire sucked his blood out and left no trace of it. Initially, I assumed it was more of the same, but the myth of the smoke creature is brought up so late that it feels a bit jarring. We go from a reasonable historical setting to magic without any warning. The fact doesn’t come up until halfway through the book where it shows to have a sense of fantasy within it. At least with mine, I mention the possibility up front, but here, you have no idea that it has a mystical element to it.

Granted, someone being killed without a single drop of blood is mysterious, but with creative planning, you could handwave that as, say, an alchemist, or even bring up this mysteriousness earlier. The fact was jarring to say the least.

This does have a sense of unease with the Brothers desire to kill just to pin the blame on whoever after failed attempts to find the culprit. This does bring up Christianity and heresy, though, which goes back to the whole alternate history thing. It does play some sort of role, but since this does have a mythical being as the villain, perhaps it could have played a role in it. In one of my previous reviews, Talon of God did this, but didn’t do a good job of separating religion from plot, and ended up being too preachy overall. Here, some form of priestly power could have taken place, even if Christians did overall shun magic. Perhaps they wield the holy light as a weapon and use it to drive the monster back to the forest.

If the story went for a mysterious vibe anyway, might as well go all out, right? This is alternate history after all.

This did have a cohesive plot all the way through, like an episode of a TV show. I could easily see a series featuring this world and its many oddities. I do find it fun having a full beginning/middle/end plot in a story in so few words. Even if I just wrote one (and published) a while back, it’s not easy. Thinking of it like a one-shot or a mini-movie is one thing, but cramming 3000-4000 words so cohesively and still get a sense of world-building isn’t that easy. Some are more situational while others feel like a small book.

It did have a very interesting story overall. The characters were fine, the plot was interesting and suspenseful, and it had a sense of mysticism that made me appreciate what one could do with a historical setting. It makes me believe that some things can exist in an otherwise ordinary world, that some mystical events are real in their own way. At least that’s how I see it.

I do want to talk a bit about the ending, however. I won’t go into too much detail (better if you read the story for yourself to get an idea) but I felt that the last scene, during the battle with the tree-smoke monster thing to be a bit cheap. Essentially, it’s a heroic sacrifice with an abrupt ending. I felt extremely cheated not knowing if the hero lived, the creature died. It almost felt as if the story had a hard word count and had to find some kind of ending. Going through all of that effort to build up an epic battle and it’s over like Thanos’s snap.

The story had a really good building to it, despite its issues, but the ending left me frustrated and I may have considered throwing my kindle in response. I’m not against a heroic sacrifice, but don’t end a story like that. Ambiguous closure is annoying. I’d rather know what happens and if life goes back to normal. It’s rushed, it feels cheap and I lost a lot of time as a response.

Ending aside, this story had its moments. The world building in an alternate history setting was nice, the characters were fine, and the plot kept moving at a nice pace. However, it’s hard to recommend knowing how it ends. It had plenty of potential, but if the story came out differently (again, the holy magic vibe) then it would have been fine. But it wasn’t one of my favorite stories.

I guess we’re ending off the year with disappointment, huh? Oh well. I have plenty of new stories to share next year. This is the final blog post of 2018 and I’ll be taking the rest of the year off. Tuesday, I’ll have the usual status update post and a goals list for 2019. I’ll also start a new twice-a-week format for traditional blog posts, so that’ll be fun. Let’s keep it going into the new year.