Fiction Friday is a series where I talk about what I’ve been reading. Short Stories (and sometimes Novellas) are featured as in-between posts and the first Friday of the month will feature a new novel review. Today, I review Remaking History by Kim Stanley Robinson. 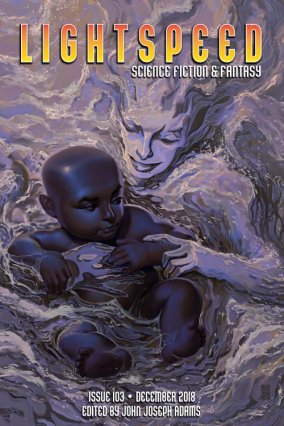 History is an interesting thing. Preservation and accuracy must be key to understanding who we are and where we came from. But some have other ideas, twisting historical facts into their own vision. Eventually, the ability to distinguish truth from fiction become dulled, and common falsehoods become historical facts themselves.

No, I’m not talking about Trump and his Fake News brigade. I’m talking about today’s story. We’re talking about Remaking History by Kim Stanley Robinson, as featured in Lightspeed Magazine, originally in Other Edens II. You can find it here. This is a story focused on making movies on a lunar base. It’s fun and true to Hollywood as you think, so let’s see what this is about.

The story follows a director and crew seeking to remake a movie called Escape From Teheran, which stars Robert De Niro. The movie barely told the story of the hero, Colonel Jackson, so by remaking a bad film, the director seeks to tell his own version of the event, much to the cast’s annoyance. However, during the shoot, a meteorite hits the lunar base and threatens to take everyone with it into the air-less void.

While the leadoff was more or less banter, the story did pick up soon after. It starts with dialog which has always been a turnoff for me. It doesn’t explain who the characters are or what they look like and I did think the whole story would be like that since it does go on for a while. I would have loved to see a scene play out before explaining their purpose. That said, getting into the life of an actor remaking bad historical films on a lunar base on the Moon just for kicks is a humorous concept.

This does go into how Hollywood is infamous for taking historical events and basically hyping it up with explosions, action scenes and lots of make out moments. While some historical movies have done well, others try too hard to feel like an action movie rather than a true historical event. Especially when they add crazy special effects. So much for historical accuracy.

They do feel like the typical Hollywood types with the actors questioning everything the director does because he’s too far gone in his own ego to care. The whole concept is “What makes a hero?” That’s the core message that this story sends. Is it about being famous at the right time? Like Martin Luther King, Jr., Gandhi, or Lincoln? Or is it acts of bravery, no matter how small, making a huge impact? John’s effort to save his fellow actors is something he had never considered doing.

I do like the touch here. Most actors play roles of being super skilled and daring, but they’re just acting. Were they actually attempting to save a life, things might be different. I’ve seen works like that and I appreciate that being in this story, even though it may have been done before. This was 1988, though, so I’ll give it a pass. The relationship between the cast was fun to read overall and truly felt like typical Hollywood conversations, even having a spa bath inside of a lunar base where gravity is less than that of Earth. That’d be a ton of fun.

That said, I felt the idea of it being in space didn’t make any reasonable sense since it wasn’t clear right away that they were even in a space base, to begin with. It could have taken place anywhere else. An old airbase, a storage shed, but while the idea of them being in space is cool, I wasn’t seeing how this couldn’t have been anywhere else. It goes give it the sci-fi theme, but only barely.

Still, them shooting films in space is neat. Having to make cool stunts you wouldn’t be able to do otherwise like leap on top of a building in one jump or even dive like a missile to block someone. Most of that is special effects, but with them on the moon, they ARE the special effects. Heck, they can do their own stunts. Would be cool for certain moments. Want to have a slick action scene where everyone is jumping all over the place? Go to the Moon. Want to have a guy blasted five hundred feet with a prop shotgun? Go to the Moon. It’s a fun idea and I’d love to do that sometime. With how slow things are going with space travel these days, I’d likely be dead before long. Space Tourism can’t come soon enough.

This is a fairly simple tale and while it was fun to read, it left me wanting a bit more detail and clarification on their location. Though movies on the moon seem like a fun concept, it’s not executed clearly and the banter at the beginning could have been introduced better.

I’ll be reviewing one last story for next week and then, that’s it for 2018 for the Silver Claw Inn. It’s been a fun ride, and here’s hoping 2019 is even bigger.

That’s all for today. If you liked this post and want to see more, I have a Ko-Fi page set up. Why spend a 3 bucks on a Starbucks Coffee when you can help support hard-working authors like me? Every bit helps and keeps me going. So thank you, and remember, the inn is always open.