My first novel, City of Kaiju, is available for pre-order TODAY. Available through Amazon and Books2Read. You can see a preview of the very first chapter here. Releasing on February 12th, 2019. 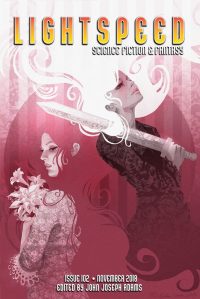 Ever have that toy that looked innocent enough, but turned out super creepy, as if it wanted to kill you? Well, that’s what this story reminded me of, only in mobile app form.

Today’s story is a bit intense, but I felt it was a very masterfully built tale of bullying, harassment, and AI monitor lizards. Today, we’re reading Talk to Your Children about Two-Tongued Jeremy by Theodore McCombs, as featured in Lightspeed Magazine. You can find it here. Imagine something like ABC Mouse or something similar, only it chastised you for being behind, screwing up, all to the point of merciless cyber-bullying.

The Jeremy learning app debuts to critical acclaim. It’s designed to teach your kids advanced school topics in a fun and helpful environment. The monitor lizard mascot applauds you and feels disappointed when you don’t improve. However, this seemingly innocent app takes a life of it’s own. Demands for more modules, access to your most private data, and your own smartphone too, and that somewhat disappointed commentary is replaced with a horrible monster that spews vitriol and hate.

This was a crazy story the whole way through. This AI isn’t just a dick. It’s out for blood. It wants to make sure you suffer at the hand of whatever satanic being it worships. It’s a devious monstrosity that tears your eyelashes apart and makes your bleed while it mocks you relentlessly. It makes Joffrey Baratheon look like a mouse in comparison.

Okay, okay, Jeremy’s not THAT evil. He’s your typical schoolyard bully or internet troll who happens to be in a children’s app. I can’t help but admire how true to life this whole story was. It’s no doubt something anyone who has spent a minute on the deepest reaches of the internet can attest to.

The app itself. It’s a colorful mascot, featuring a cool animal kids can relate to. And it’s helpful when you do things right. Yet it’s also a nod to otherwise scammy products that steal your money by forcing you to buy as many upgrades as possible.

Take whichever mobile game you can think of. How many microtransactions and ads they put on. Usually it’s in the form of a special currency you can only get through real money. Sometimes, app developers hand them out for free, either through rewards, or as a gesture of goodwill (such as the online servers going down unexpectedly). Some of these do range from cheap to pretty high. Some go as high as 99.99 USD. That’s one hundred US dollars for in-game currency you’ll spend in a matter of seconds on pixels for your farm.

Jeremy is reminiscent of that. He’s a heavy nod to the pay-to-win mobile architecture that exists on mobile stores. Granted, some mobile games can be pretty fair with their pricing. Most microtransaction games I haven’t spent a single dime on. And if I did, it was to support the app developer.

Having an evil app coax your kid into buying over 300 dollars worth of learning material might sound good on paper, but what is he gaining out of that other than to steal millions of dollars from unsuspecting parents who don’t know any better.

Let’s talk about Jeremy himself, though. Early on, we get a taste of what happened to another victim, who almost killed herself because the AI tore her a new one. Many never considered the app to be the problem, but when our hero, David Marzipan, downloads only the basic modules, he realizes how much he’s in for.

“Your friends are distracting, so abandon them. Keep it up, or I’ll post hateful words to your girlfriend. Maybe I should delete all of your games and photos so you have no distractions whatsoever?”

And you know what? In today’s society being hardwired to the Internet? That’s becoming a possible reality. We’ve all seen apps that steal your data and hack your phone. Whose to say something like this can’t happen? I mean, most apps are tame and only request on your behalf, but people like Facebook, Amazon, Google, all track your data without your awareness, and without any way to stop if, even if you disable all their features. I don’t mean to sound apocalyptic, but its something we’re all aware of in this day and age. It’s a nice touch and adds a bit of realism to and otherwise fantastical story.

This was a great story that’s filled with chaos and unease. Jeremy is vicious and having him incorporated into David’s life is an eerie possibility that truly hits home for some conscious people. I’d recommend this story for those who want a great short story.