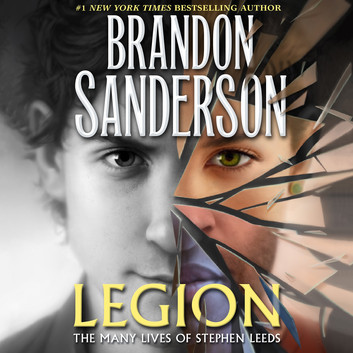 How insane are you? I am. In fact, I’m so crazy, this is going to be a two-part review! That’s right, this is too big for one blog post, so let’s begin.

Today’s novel review is Legion by Brandon Sanderson. You can buy it here. Mr. Sanderson is a very prolific writer, penning numerous fantasy series such as Mistborn and Stormlight, and now, he’s released his novella series into one book, with a brand new story. So let’s see what this is all about.

The many lives of Stephen Leeds.

The story follows Stephen Leeds, a man with many personalities that manifest as actual beings, as in people only he can see. People who feel and act real to him, but are his own creations. Mr. Leeds is an investigator who works on solving mysterious cases. His other aspects are unique and have a wide array of personalities.

One is Tobias, a black man with a fascination for history. Ivy, who is one with words who has a sharp eye. And J.C. a loudmouthed, gun-toting, sometimes racist nut-job who is his sharpshooter and all around ditsy lunatic. Each of them helps Stephen on the occasional mission and they’re all a joy to read. Plus, these people are imaginary, either knowing as much or, in J.C.’s case, taking the idea and running it so far into the ground that it returns to the surface.

Plus, they’re not the only ones. He has numerous ones, of all kinds of nationalities, races, genders and so on. Yet he can only manifest a few at a time and some appear even if he doesn’t allow it. Some say he’s insane and should end up in a mental asylum, but he finds it perfectly normal since he can function like a real person even if he has to pretend imaginary people exist.

That’s the gist of it, but there are three separate stories in one book, so I’ll go through each one and review them in detail. Many of them are short for a standalone review, but I’ll do my best.

The story introduces us to Stephen Leeds, a man with too much time on his hands and just as many imaginary co-workers. He’s the only one who can see them, and it causes people to see him as a crazy man who talks to no one. Yet he’s an investigator who is tasked with retrieving a mysterious camera designed to take pictures of the past. One man seeks to disprove the concept of religion, but knowing how dangerous such a tool could be in the wrong hands, they hunt down the camera and retrieve it before disaster happens.

As a story overall, I’ve been enjoying it immensely. Seeing a unique hero have so much power, yet be dragged down all the same makes for an interesting her. He’s not a Stu-type character, and his aspects are entertaining enough that I’m always looking forward to their dialogue. Stephen’s effort to try and act normal is amusing, but while he does improve on it sometime during the stories, it can provide humorous, yet awkward situations.

The concept of trying to disprove religion (in this case Christianity) is a concept that isn’t new. While the events may have happened a long time ago, it’s hard to say if anything in the bible is true or not. No doubt such a storyline would ruffle some feathers since there are people who see religion as immoral in a way. I myself have some spiritual beliefs, but I don’t believe in a god.

Religion is a common theme, extending into the following story, and is seen as a negative in this world. Some scientists will do anything to disprove the existence of God, but for some, God means something else entirely. But in terms of religion being a negative, most people will go to ISIS or Westboro Baptist Church as a glimpse into the dark side of religious faith. I have no opinion one way or the other, but it’s a common enough concept in fiction.

I do like the storyline, having otherworldly tech be at the forefront of these investigations gives it a science fiction feel. A camera that can view the past. I’ve had an idea for my fantasy series of flowers that when touched, show a glimpse into the past. This seems like a modern-day version of that. I love the concept and sort of a Mission Impossible, James Bond type of feel. Stephen Leeds seems like a secret agent. Except if he had an array of imaginary friends.

The story is eight chapters, making it the shorter of the bunch, but next is the longer one at twenty-one.

The story involves a company who has invented a way for humans to store computer data in their own cells. One of these potentially could cause a virus to break out, so Stephen must recover the one subject who has the keys to all of this.

This was the most interesting of the three and a neat concept. It’s been said that our mind could house all of the information on the internet, and still have room left. This concept is taken to its literal extreme by making humans into real cloud servers. I’ve heard tales of people using our minds as some form of tech but considering that’s begging to be manipulated by some evil mastermind, most people see it as nothing more than fiction.

Anyway, this is becoming a mystery, which is a nice aspect of a science fiction story. It ends up being a whodunnit type story as Stephen and his aspects discover who would steal Panos’s body. If that weren’t enough, we have an assassin hired by a rival company of Stephen’s client sent to take care of him before their plan goes up in flames.

This really showcased how Stephen’s unique ability starts to grow out of control. His aspects, who have only followed him, start to do whatever they feel like and at one point get separated. We also discover that he can gain new aspects by reading certain things, but here, some aspects are family members who appear without any prior knowledge to Stephen.

I am amused by the fact that Tobias has a pretend satellite that he speaks to. Yes, even his hallucinations are hallucinating. It’s a hilarious concept and it really adds to the quirky nature of this series.

We do see more aspects gain prominent roles here. Audrey, a computer geek, Ngozi, a scientist who is a complete germaphobe, Arnaud, a Frenchman who was the most recent addition. I do appreciate the level of diversity in this story, and while not everyone can have a humongous role like the main trio of aspects, they are treated fairly well.

There is one more story to go, but I do have more to talk about. This could get pretty long, so check out part two tomorrow where I review the final story in this trilogy collection, as well as about other things related to this book.

City of Kaiju is set to drop on February 12th, 2019, with pre-orders happening next month. A tale of sacrifice, trust, and companionship in the midst of a Kaiju invasion. See a preview here.