Fiction Friday is a series where I talk about what I’ve been reading. Short Stories (and sometimes Novellas) are featured as in-between posts and the first Friday of the month will feature a new novel review. Today, I review Impossible Male Pregnancy: Click to Read Full Story by Sarina Dorie. 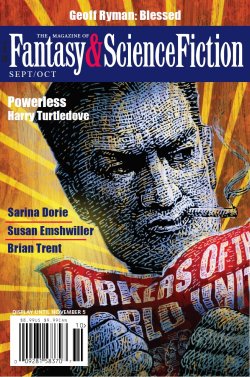 You won’t believe the story I have. The results will shock you.

So yeah, given the title, you’re probably wondering why I’m reading a story based on male pregnancy and clickbait. Well…cause I’m a lover of the strange and the unusual. And this is about as strange and unusual as it gets.

Before we begin, I’m not that big on male pregnancy stories. Probably because authors are trying to look for scientific ways of it happening. But I gave it a whirl, because 1, it’s F&SF and two, how often do you see stories about male pregnancies published in professional magazines.

So today’s story is “Impossible Male Pregnancy: Click to Read Full Story” by Sarina Dorie, as featured in Fantasy and Science Fiction Magazine. You can find it here. So, click below if you want to know the secrets of male pregnancy.

Everything you know about pregnancy is wrong! This man proves it!

The story focuses on Javier Rodriguez, his wife Lisa, and their adopted daughter Divinity, and the struggles when the father of the family ends up pregnant. Javier is the result of a twin pregnancy where he absorbed the other fetus and thus created male and female hormones. It’s complicated to explain, but the story revolves around living the life of an expectant father and questioning the world through typical masculine eyes.

I’ve always imagined situations where men were pregnant instead of women. It would be impressive, to say the least, but this does capture a father’s mentality when he finds out that the one carrying the child is him. Even if the man is a proud supporter of women, he’ll no doubt go into a mental breakdown once he realizes he’s giving birth, a trait exclusive to women.

While men such as myself understand our masculinity, no doubt we’d be a bit put off when we have to do tasks normally attributed to women. No doubt that history has placed both genders in clear lines and despite our efforts to move away from that, I doubt we can abolish the concept completely.

That said, I feel this would be my reaction if I were pregnant, or anyone else. I mean, how often does it happen, if it happens at all. I appreciate the mind of the man who never expected this and no doubt is suffering through this ordeal. I’ve heard that there’s a bit of back and forth, almost like a couple is fighting, and I’m not sure if it’s due to heightened hormones or what else. I heard my mother suggest to my brother that his wife would spew hateful things while she was trying to give birth, but the only recommendation is to nod and smile.

This is a good tale and one that truly explores the what-ifs and isn’t there just for fanservice. Plus, the scientists who want to study him are, while a bit cliche, reasonable. The first time anyone’s done this, why wouldn’t you take the time to research it?

I did appreciate the other nuances as well, the interracial marriage, adoption, the main character not being a cliched Hispanic man. And to top it off, I felt close to Javier and I’m sure the men who happen to read it might feel the same. The miracle of life works in strange ways sometimes.

As far as the story itself, it goes through the normal life of a pregnancy with an (albeit expected) twist at the end. No, it’s not an alien popping out of your chest, but you’ll have to read to find out.

I will say that there were slight moments where it did make me…well, uncomfortable. To begin, Javier’s rant of why he can’t be able to give birth, which would be any man’s reaction, let’s be real. I did notice the consistent use of the word “Caucasian” to describe white people. First I’ve heard it being used so casually in a sentence, whereas most others would either exclude it outright. Maybe it was because the main character was of Hispanic origin, but I can’t say I’ve heard anyone like him use that phrase before.

That was my only gripe with the story, aside from…well, it being a male pregnancy story. Granted, I will give it effort to justify it other than the guy has something else down there (trying to be mostly kid-friendly here, so I’ll let your imaginations run wild) but this didn’t make me enjoy the concept any and feels any other type of story. So while it was a good read, it’s gonna take a lot more to make me appreciate this sort of thing.

So that’s the story. I will admit the title did make me curious, and it did feel like click-bait, as the title implied, but I’d give this more or less a shrug. Not bad, but there are other tales out there.

That’s all for today. Take care, and remember, don’t believe everything you read on the internet.

Next article: Ten incidents where Steven and Tsuki almost got run out of town by the local guard (Number six will shock you)!

You’ll never guess what this guy puts on his social media posts.

An author’s short story about Japanese mythology and Feudal history contains this one thing that’ll change you forever. Read on Amazon or wherever ebooks are sold.

And this girl’s dog is on a diet with gargantuan results. Find out here just how big fido can get.

And you won’t believe what this author has to say about running click-bait jokes to the ground.