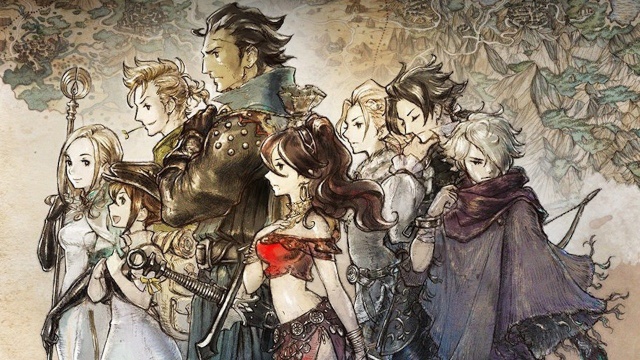 Back in the 90s, Japanese RPGs ruled the gaming scene. Final Fantasy, Dragon Quest, Wild Arms, Secrets Of Mana, Romancing SaGa, Xenogears. Too many to list, but this was the decade where JRPG franchises thrived. Today, some still exist, but the western franchises are the true dominant ones now. Dragon Age, The Witcher, Pillars Of Eternity, Divinity, Warcraft, and others.
But one game came out for the Switch that is not only a hotly anticipated title but one that hits all that nostalgic notes. I’m talking about Octopath Traveler for Nintendo Switch. It’s not about octopi, I assure you. It’s about eight seemingly isolated heroes who unite for a common cause. Each has their own history and their own story, but you can play all eight characters.
Going through their story would take forever and I’ve been meaning to talk about it for a long time. So I’ll just go through the nitty-gritty and explain the finer details of the game.

You are one of eight heroes setting off for personal reasons, whether it’s paying a debt, finding an old friend, or even discovering oneself, each of the eight heroes has a purpose. Inevitably, they all meet up and find their destinies together.

It’s a fun adventure that’s simplistic in execution, but with the popularity of story-driven plots and memorable characters, this game can keep it up by making each character unique and entertaining. We have the stoic and noble Olberic, the young and confident Alfyn, and the calm, yet cold Therion to name a few.

Having such a collective cast of characters is what makes this game fun, and everyone has a story to tell. I’ll go over a few real quick. Primrose, the dancer, was abused by someone who took her in and after seeking vengeance for allowing her father to die, she hunts down the man who did it to begin with. Olberic is a soldier whose friend betrayed him. Living his life in a small village, he must live the life of a commoner, but his old past come to haunt him and he must set out to confront his friend once and for all.

While we’re on the subject, this game has a job system. Basically, each one starts off with a set class and a main weapon. Primrose is a dancer with a knife, Therion is a thief, who also uses a knife, and Alfyn is an apothecary who concocts medicine to either heal his party or harm his enemies. Kinda like classes in an MMORPG.

I feel like having no set hero to start with makes for numerous fun playthroughs. You can even see your party’s story if you didn’t start with them. I think it’s a fun idea and gives a new perspective on an RPG. I feel more should do things like this. It feels like a Multi-POV game, except everyone is tagging along as well. Sure for gameplay reasons, it won’t make sense when said party member is all alone in a cutscene, but this feels like a refreshing idea and works in its favor since future playthroughs can pit you as a new hero or heroine to start off.

This game doesn’t use 3D models like most modern games do. It uses sprites similar to a Super Nintendo RPG. But they also employ a cool 2D-3D effect where even though the world is made of pixels, it’s still rendered in 3D. It’s truly stunning how retro it is, but it feels like something you could enjoy from the 90s (maybe as a 32-bit game) if it were made back then. Heck, I would assume it’d be an all-time classic, even now.

The only thing that put me off is the fact that this game actually has voice acting. When I play games that don’t have it, I tend to imagine what the characters sound like. The voice acting, honestly, is top notch and features plenty of gaming and anime voice actors I’ve come to love. Yet when it’s mixed with 16/32-bit sprites. It feels off to me, but I can’t feel why. Maybe it’s seeing no one physically talking or any animated cutscenes where these characters do talk.

I mean, you can turn it off and play it like a good old JRPG from the 90s, but I feel strange having to listen to inanimate sprites talk with real voice acting. It’d be if the Pokemon games from the GBA had characters who spoke. It’s not terrible, but it feels odd in a game like this.

It’s pretty much my only issue with this game, but I figured I should bring it up. I’m a bit of a sensitive person when it comes to my nostalgia, but it’s what made me…well, me. 🙂

When I played the beta a while back, I noticed how some of the bosses were a bit difficult early on, to the point where I had to get creative to beat them. Basically, this meant that I had to buy equipment to beat them (blame me for being a filthy casual sometimes). After that, the game became manageable and as long as I bought things at every village I went to, it would make the progression that much smoother. I feel somehow, I might hit a wall and be unable to progress until I found enough gold and weaponry to beat the bosses, but I haven’t made it to that point yet.

Speaking of which, the combat is as old-school as it gets. It’s a turn-based RPG, which the characters all take turns attacking. There’s also a weakness system where if you exploit their weaknesses enough, it disorients the opponent and you get not only a free hit but increased damage as well. It’s a fun idea that shakes it up a bit instead of having a singular super effective ability to spam over and over.

It feels refreshing, yet familiar and JRPG fans like myself should ease into it pretty well. While I do prefer the more action-oriented combat more, this type of combat can be more strategic and faster in pacing. I do like Final Fantasy XV’s combat a ton, but something about turn-based makes things easier for those who don’t want to manage 100 things at once.

This game is a love letter to the golden age of JRPGs, during a time where Squaresoft was king and seeing an intricate story in a time of arcades truly made gaming what it is. If you have a Switch, I strongly recommend trying it out. If you loved the old era like I did, this is one way to feel nostalgic, yet embrace the future. I hope some sort of follow-up is in the works because I might have a new favorite franchise in the works.