Fiction Friday is a series where I talk about what I’ve been reading. Short Stories (and sometimes Novellas) are featured as in-between posts and the first Friday of the month will feature a new novel review. Today, I review Abandonware by Genevieve Valentine. 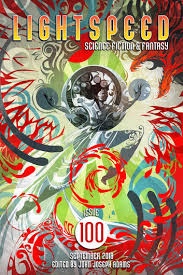 Back to business. Video game business. Today’s short story is Abandonware, by Genevieve Valentine, as featured in Lightspeed Magazine. You can find it here.

Before we go on to the story itself, this came from Lightspeed, which is celebrating the wonderful landmark of 100 issues. That’s a lot for a short fiction magazine, and most don’t even go that far. There are still magazines from the 60s that are still active today, but I have to celebrate since I love this magazine a lot. Happy 100th Issue. Here’s to a hundred more)

The story is about a young girl who is now in her adult life, reminiscing about the day when her parents ended up getting into an argument and inevitably divorcing, leaving her parents to deal with custody while her precious plush rhino goes missing.

Meanwhile, she discovers a game with so many hidden secrets, including a deer that keeps killing itself over and over again. No one knows why this deer exists or who put it in a mystery game set in the 1960s, but this deer might have some connection to her past, memories she’s trying to push away.

We’ve seen stories about haunted video games before, and this kinda fits the mold a bit. I like the inevitable connection between the main character and the deer, coming back to pretty much haunt her for what she’s done. Sending a subtle message for her.

It’s a genuinely creepy, but at times heartfelt tale of someone trying to escape what they’ve done, but the ghosts linger on. I like how the story connects the two different story arcs in such a cohesive way. The symbolism is clear and the message is haunting in its execution.

I will say the story can get confusing at times. It’s a little hard to follow when it goes between sub-plot A and sub-plot B. The flashbacks are through the main character, but the video game is in the present. And the two switch very often that you sometimes forget what the main plot was about.

While I like the concept and mysteriousness, it could have been explained a bit better. That said, I did enjoy following along and putting the pieces step by step. Having an odd secret easter egg that no one can figure out is the hallmark of video game myths.

Sometimes, developers put in hidden objects or clues and let the fanbase go wild. Sometimes, in MMOs, it’s to promote future content or an expansion. Sometimes, it’s that rare urban legend that goes undiscovered for decades (until close to thirty years later when one developer finally sheds light on it).

I feel this could be real despite it being specific that no one would think that this game was haunted. It’s like seeing a rare character out in the middle of nowhere (bonus points if it’s an area that’s impossible to access through typical gameplay) who gives you an item for finding him.

I love a good story centered around gaming’s biggest secrets and this story did a good job of incorporating it into the plot. How it connects to the main character and might potentially be related to her, even if others can see it.

The story is about video games, but it’s mostly about the character than the game itself, which gets a few mentions here and there. I do like that it’s not completely focused on the game, and yet it’s still part of the story. Having all of this in so few words is a good effort. I would love to see more of this kind of work maybe in novella form, going into detail of the MC’s past and gaining insight into her life and how she lost her plush rhino.

Anyway, this was a spooky, yet touching tale of fear, memories, and suicide. I love how the story brings two concepts together and would love to see more of this stuff.