Join The Silver Claw Inn Newsletter and get mini-progress updates and previews to upcoming works. I may even throw a mini-story or two featuring my characters above. Sign up today, and remember, the inn is always open.

Fiction Friday is a series where I talk about what I’ve been reading. Short Stories (and sometimes Novellas) are featured as in-between posts and the first Friday of the month will feature a new novel review. Today, I review Presumed Dead, an episodic serial by Rick Kennett, narrated by Marguerite Kenner. This is part one of a three-part series. Part two will debut on August 28th in lieu of a traditional post.

I’m changing things up for Fiction Friday and discussing a serialized story. This one is Presumed Dead, by Rick Kennett, narrated by Marguerite Kenner, as featured in Cast of Wonders. You can find Part One here. This is a self-published story from 2016 that Cast of Wonders is doing as an episodic serial. I don’t do too many of these (cause there isn’t a lot out there) so I figured, why not?

This is going to work a little differently since as of writing this, only three parts are out. I’m only going to do part 1 today, but this coming week, starting Tuesday, I’ll review part 2. I will finish it all off on Friday with another grand Fiction Friday special. Today, we’re delving into Chapters 1 and 2. 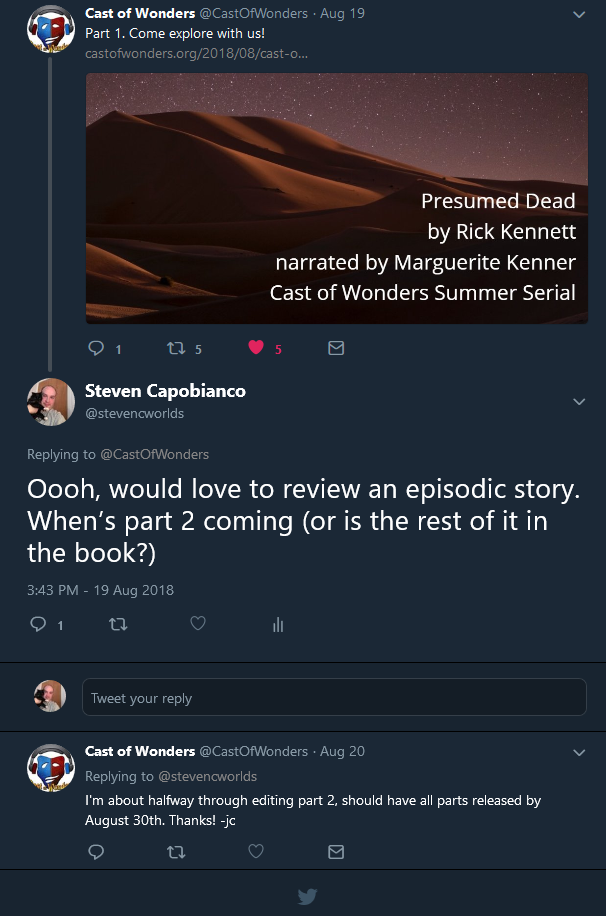 Let’s get underway, shall we?

Marooned on A Fungal Planet

This story is about a pilot named Cy De Gerch, who is an augmented human designed to work with a battleship on an undisclosed mission. Inevitably, she finds herself marooned on a fungal planet where she must survive and force the past to die. After all, she is presumed dead.

This is a multi-part story, and as of this writing, three parts have aired. I may need an extra week to go over this, but for the most part, I’m enjoying it. I love space exploration stories and visiting new planets, so this is right up my alley. Cy’s also an interesting character. She’s very blunt and to the point. She’s followed by a spectral vision of her old friend, Jos, who keeps taunting her about running from her past since many of them think she’s dead.

She’s also got a good amount of personality, basically when she thinks she’s going crazy. The voice over work by Kenner really adds to it. This character is a teenage girl with the mannerisms of a high school kid. Basically, if someone from your average high school comedy wound up in space.

It’s hard for me to discuss this without reading the entire thing, so I’ll keep this brief for now. The “episode” ends with her finding some sort of spaceship graveyard. Being stranded, finding something out of the ordinary (ordinary for this planet of course) is always an interesting thing.

She’s not supposed to encounter any lifeforms, let alone ships. And if she discovers this graveyard, does that mean she’s not alone. Are there others waiting for her? It makes me want to see more.

I felt the beginning starts off quick, jumping right in with no slowdown whatsoever. I almost expected this line to be in the middle of a chapter, but not as a beginning. It does start with her stranded before moving on to how Cy got stranded.

The first chapter does feel a little expository and tells us a little too much up front. Cy pretty much blurts out that she’s associated with the ship’s weapons structure, whether due to her teenage side or through the author’s necessity, I felt this should have been saved for towards the middle as a big plot development or something. That’s just me.

I should mention the adorable spider/lobster alien. I normally hate spiders. Creepy, sometimes dangerous, and not welcome in my inn. But I am curious how to handle alien creatures should we ever get the opportunity. Obviously, we can’t treat them like our animals and creatures, but the idea of a spider-lobster hybrid is amusing, and how innocent it acts and how Cy treats it like some sort of shrink at a psychiatric center.

The description for the novel does imply that we’ll see it again someday, so there’s hope for this little guy, whatever she names it.
Tune In Next Time…

Again, this is a three (for now) part serial based on the novel of the same name. In fact, I’d wager the novel is roughly the same. So you can listen to all current parts on Cast of Wonders, or you can buy the book here.

As for episode two, it will debut in lieu of a typical Tuesday blog post. Unless a big news topic comes, expect part 2’s review. Friday, I’ll culminate all of this into my overall thoughts. So while this is short (first time doing an episodic review after all) I’ll have a complete picture next week.