Fantastic Wonder is a series of Fantasy related posts where I discuss different aspects of the genre and the many tropes and plot lines associated with it. Today, I talk about the recent anime series, Persona 5 The Animation.

I discussed a game called Persona 5 in the past. It’s a video game by Atlus where a group of teenagers discover a mysterious world where a human’s darkest desires are manifested into “palaces,” that reflect a person’s true personality. After seeing these humans hide their horrible misdeeds, the heroes form the Phantom Thieves, a group who seeks to change the hearts of evil criminals.

It’s an amazing game that has become one of the best JRPGs of all time. And after a full year, since the game released, an anime adaptation has come out. Atlus loves to make adaptations based on their titles along with many other developers (Danganronpa, a visual novel, is a famous example. In fact, visual novels tend to be adapted all the time). They’ve done it with Persona 4 and Devil Survivor 2, another Megami Tensei title.

So how does this series stand compared to the others? Let’s find out.

If you’ve played Persona 5 at all, you know how the anime goes. The hero, Ren Amamiya is on parole after a run in during a domestic dispute and framed for a crime he didn’t commit. He’s forced to live with caretaker Sojiro Sakura, who runs Leblanc Cafe. From there, Ren attends school and meets Ryuji Sakamoto, who together discover the strange world known as the metaverse. There they discover their gym teacher’s distorted desires and vow to discover the truth behind this odd world.

It’s a faithful adaptation and worth it for those who either don’t intend to pick the game up one way or another (which comes down to either a) not having any interest in JRPGs or b) not having a PS4). The anime does a good job of capturing the character’s personalities. It’s also where Ren talks, whereas the only time he did in the game was in a few cutscenes or in battle.

The anime does follow the story, but they can’t cover everything. The anime omits dialogue during the dungeons and seem to breeze through certain palaces with ease. In game, this usually took days (in game, not in real life) to complete, but while they can’t pad out dungeons, I felt some instances they went through the palace too quickly. Most of the action happens outside of the world between all the characters. This happens in game as well, but the main action is within the palaces. Persona 4’s anime had moments inside of the alternate world, but I feel I’ve seen less of it in this one. Might just be me. 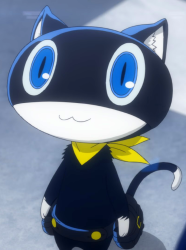 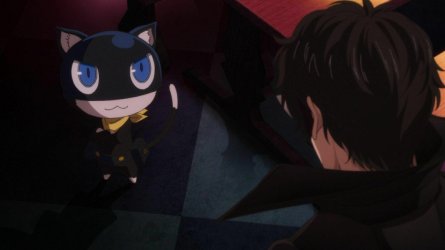 One thing that bugs me is sometimes the animation can be a little wonky. Specifically how the characters are drawn. It’s especially glaring with Morgana, who’s a small, anthropomorphic cat. Comparing the animation from both the anime and the cutscenes in the game, it’s a noticeable difference.

The anime is produced by Studio Cloverworks. They’re an offshoot of A-1 Pictures, who’s best known for anime franchises such as Fairy Tail and Sword Art Online to name a few. They also did a Persona 5 Anime short called The Day Breakers. Most of their works have stellar animation and I’m a little disappointed their ability wasn’t carried over to this. I mean, they’re not a reputable studio such as Bones or Madhouse, who can put out one beautifully animated episode after another.

There are moments where the animation looks fine, but other than that, the animation and character design isn’t one of its strong suits.

How faithful is it to the game?

It’s very close to the game it’s based on. Chronologically, it’s almost exact. A few scenes were added to give it more detail. They even include all of the side quests such as the recent episode where they discover their homeroom teacher works as a housemaid on the side. It’s details like this that make it welcoming for anyone who isn’t able to play through it but wants to know the story.

Some sequences, specifically those in the palaces, are omitted, which granted, they can’t show everything. Otherwise, it’d take too long. This is likely going to be a 24-26 episode series, like the other Megami Tensei anime, but they do keep the important dialogue in place. Again, the palaces feel quick compared to the rest of the story. Persona 4’s anime was like that too.

Even watching it, I feel the game is far superior. This is a good option if you can’t play the game, but I feel the game should be given a try. I made a review of it describing it as everything I grew up with as an M rated title. It’s something I can enjoy while reminiscing about all the things I loved as a kid. I played a few M-rated titles when I was young, believe it or not, like Doom and Diablo II, but this probably would have been something I’d enjoy. Granted, most of the aforementioned games are PC titles, but I probably would have gotten away with it.

So I do like the series overall and I’d recommend it looking for an adaptation to one of the best JRPGs of all time. It might not be to everyone’s taste, but for those that enjoyed the game like I did, it’s fun to relive those moments all over again.

In the future, I think I might wait until the end of the season to review anime since many of them tend to be either 12 or 26 episodes each. I hope to feature more anime in the future.

I announced other works, including a kaiju-themed “mini-novel” (which you can learn about here) and a short story anthology in the near future. This is only the beginning for me and I have more to share.