Fiction Friday is a series where I talk about what I’ve been reading. Short Stories (and sometimes Novellas) are featured as in-between posts and the first Friday of the month will feature a new novel review. Today, I review Traitor Born by Amy A. Bartol. 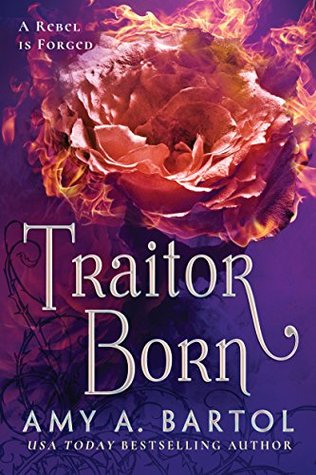 Welcome to another lovely installment of Fiction Friday. Today, I’m reviewing Traitor Born, the second of three books in the Secondborn Series. You can find it here. I loved the first book and named it my favorite of last year, so let’s see how the successor holds up. This book, being a sequel, is going to be shorter than my usual reviews, but I’ll do my best to add enough feedback. So, let’s begin.

The book begins with Roselle, after the events of the first book, taking refuge in the Halo Palace, owned by the Fate of Virtues. It’s here, she uncovers a grand conspiracy to overthrow Othala, her mother, and leader of the Fate of Swords. But their conspiracy isn’t the only thing brewing, as a forbidden alliance is uncovered, putting the entire world at risk of her mother’s rule.

This book is where we get deep into the plot like never before. So many significant moments occur that I’d spoil all of it trying to explain. The first book had its moments, but I felt it was setting up for the future. Now, the plot is kicked into high gear, and it’s a wild ride.

Roselle goes through so much character development. The Fate of Virtues do all they can to protect her, but she refuses to be treated as nothing more than a pawn in their grand scheme. Yet despite her rebellious attitude, she makes things worse for herself and others. What I like about this is that despite her pride and cunning, this is the most vulnerable we’ve seen Roselle. In the first book, she’s a little too powerful, but this is where her humanity shows as she realizes how powerless she truly is.

She has numerous panic attacks and gets herself into so much danger that it’s exciting to read through all of it. The pace barely slows down and although there are fun moments, the story takes a turn for the worse with the big death towards the end (I won’t give that away). Plus we get to see her as more than just a battle-hardened heir to a government aristocracy.

This shift is what I wanted from the first book, where despite her skill, she’s unable to overcome the fact that she’s the most important person in the world, and that fact is now coming to light how planned out their mission is.

The big point of this story is how many of Roselle’s love interests exist in the story. We have Hawthorne Trug, Reykin, and (slightly spoilerish) Clifton Salloway. Well, it’s not a love triangle as it is a love rectangle or something. It’s always entertaining seeing Roselle dealing with all three of them while still trying to convince her true love, Hawthorne, that she’s the only one for her. He has his own marriage-against-his-will plot to worry about.

Reykin is the interesting part. Originally, he seemed to be in favor of Roselle doing everything he can to defend her. Yet this time, he seemed a little cruel towards her. Yet it didn’t seem like the traditional domestic violence type behavior, but more concern for losing such an important player to him. He’s humongously overbearing and tends to think before he acts. For example, he threatens to starve Roselle of antidepressant rations, but he realizes how cruel he’s being and gives it to her in the end.

Their character development shows that Roselle may not be as powerful as she thinks she is and I think that’s important. Before, it seemed like she was too good, but didn’t cross the threshold into being a Mary Sue. This time, she seems fairer in her flaws and mistakes and I actually panicked during moments when she might be caught. I’m starting to like her as a heroine and might be a good example of how I see those types of characters.

As far as Hawthorne and Salloway, they’re still their usual selves. Hawthorne is still in love with Roselle while Clifton is still cunning as always. Granted, the relationship between her and Reykin is the main focus and I while I doubt this will be continued in the future (considering the ending) , it’s still fun to see.

As far as being a sequel, I found it more entertaining and suspenseful than the first one. There’s definite improvement and has strong potential to be another big series. Roselle’s character development is better and he’s still kick-ass as always. She’s growing on me and I’m always looking forward to what she’ll do next. There are heartwarming moments that make her human instead of a character.

The description is stellar as always, and I found it better to follow this time around. A few things tripped me up, but I got a clear picture of the world in my head. My only gripe was that I found that the scenery was a little too static with her being in the Halo Palace all the time. At least with the first book, she had other places to be and more to do, but she’s more limited this time around. I felt that her being in the Palace at the beginning was fine, but maybe the subplot with the Secondborn Trials could have been a little more drawn out.

Also, I really don’t want to give away the ending, but I will say that it changes everything. Book 3 is going to be good, I can tell.

Other than that, this was a fun read. I do recommend this series for those who want an alternative to the dearth of dystopian novels out there. This is probably one of the better ones, in my opinion.

So that’s the book. I won’t do sequels often, but I will review the final book and give my thoughts on the series overall. Next month, I haven’t decided on a book yet, so I’ll make it a surprise =)