Fiction Friday is a series where I talk about what I’ve been reading. Short Stories (and sometimes Novellas) are featured as in-between posts and the first Friday of the month will feature a new novel review. Today, I review The Properties of Shadow by Nina Kiriki Hoffman 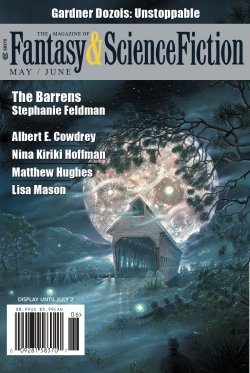 Fiction Friday: The Properties of Shadow

Today’s short story is The Properties of Shadow, by Nina Kiriki Hoffman, as featured in Fantasy and Science Fiction Magazine. You can find it here. This is a story with a unique premise not usually seen in Science Fiction or even stories about aliens. Here, we have a serpentine race with the ability to use shadow to affect their everyday lives.

The Properties of Shadow

The story takes place on a wasteland planet of Rutigar, where two serpentine people, Maga and Sisstiss (assuming that’s her name and not a snake version of “sister”), who are scrounging a planet for shadows to use for art. As they’re gathering, a mysterious visitor, Jisket Tillart, who claims to be a reporter for an unspecified publication, wants to interview the two. Despite terms and conditions Maga laid out, Jisket is persistent and the two endure a home invasion that puts a future shadow serpent in danger.

This is a good story that shows how creative authors can be in science fiction. The aliens are cool and intuitive. Having them revolve around something considered evil makes them interesting characters. I also love science fiction stories that are from the alien’s POV. I’m often bored of humans (even though I tend to write them above anyone else) and seeing this makes me happy. They’re cool creatures and very snake-like in personality. Cold, serious, and devoid of humor. What little personality they had actually given them life compared to some of the more humorous, goofy aliens. Nothing wrong with that, but I want variety.

Maga and Sisstiss are the kind of duo that I’d like to see more of. An artist and her assistant, who care deeply for each other and little of everyone else. Even with Jisket, she gave him the benefit of the doubt and laid out her own rules for the mysterious alien to follow. Their abilities are unique as well. Their entire existence is woven by shadows. Admittedly, it was a little hard to understand how it worked, if it emanated off their bodies like bubbles or if their physical shadow on the ground was part of their skill. Some series have powers that involve their physical shadow, but this is a nice concept I want to see more of.

Being artists is also a rarity in science fiction. I think it fits their personality. Many of them (at least the art museum kind, not the DeviantArt kind. Many of them are pretty chill ^_^) are often focused and distant. These snakes embody those types of artists and painters to the letter. No doubt Maga is famous in her galaxy. I kind of wanted to see more. Perhaps she’s making something that requires her utmost attention and Jisket is trying to sabotage it and is actually a fan. The rabid fanboy (or fangirl) is a common plot in some shows, but I feel this was also the case here, though it’s never said as far as I know.

Also, having multiple tails be randomly chosen and individual so that no two snake people are the same is interesting. Sisstiss’s child towards the end bears some form of her own tails and that of Maga is a unique concept. Hybrid offspring is also an idea that I don’t see a lot of.

That’s really why I like this story. It does all sorts of new without relying on cliches. It’s unique enough and while it’s not groundbreaking, it achieves that by having simplistic settings and scenarios. I always see people try too hard or be too safe with their creations. This is a set up that works well, and I feel it’s worth reading on its uniqueness alone.

This story, while not mind-blowing, does a lot of new things and does them well. It’s creative enough, realistic enough, and it’s got an intense story without being too boring. It’s got all the makings of a grand tale that goes beyond what is possible. Between the serpentine race, the shadows and giving birth through them, and the main leads being artists, this story has a lot of fresh and creative ideas. I want to see more of these stories.

My upcoming short story, Do Not Stare Into The Eyes of a Kitsune, is now up for preorder on Amazon and ebook retailers everywhere. Coming soon, June 5th, 2018.