Fantastic Wonder is a series of Fantasy related posts where I discuss different aspects of the genre and the many tropes and plot lines associated with it. Today, I talk about the recent anime series, Black Clover. 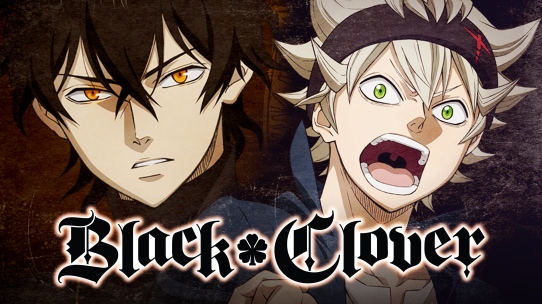 I love anime. It’s been a huge part of my life for a long time. From the big names such as Dragon Ball Z and Cowboy Bebop to newer hits such as Attack on Titan and My Hero Academia, and even oddities such as JoJo’s Bizarre Adventure and Pop Team Epic. I’ve been a proud otaku for a long time. Many of my works (including an upcoming story) is influenced by this medium. It’s unlike anything I’ve seen. It’s a style of animation for all ages. Some for kids, others for adults and all genders in between. I have such a love for the medium to this day.

I run a website focused on Speculative Fiction stories and there’s one series that’s been nagging me for a while. Black Clover by Yuki Tabata. I figured I’d talk a bit about some anime series that I’ve been watching lately that have been on the fantasy and sci-fi end. To start, I’d like to talk about this series in particular, but first, a brief story on what it’s about.

What is Black Clover about?

Ahem. Long ago, a massive beast rampaged across the countryside. Then a lone mage came forward and slayed the beast using his powerful magic. That person was to be hailed as the Wizard King, the strongest in the world. Cut to present day, our young hero Asta is set to get his grimoire, a magical book that allows anyone to cast spells. In this world, everyone uses magic, from helping with day jobs to performing. There’s not a soul in the world who isn’t able to use magic.

Except Asta. He’s the only soul alive who can’t use a single spell, not even slightly. Despite this, he insists on being the Wizard King, much to the mockery of others. Meanwhile, his foster brother, Yuno, is a gifted mage, capable of using wind magic. Together, they take the magic knights entrance exams to get one step further to being the next Wizard King.

If any of this sounds familiar then…yes. It’s been done to death numerous times. In fact, I’ve used the whole “beast rampages until a great hero vanquishes it.” Even having a kid with no powers is reminiscent of so many other shows that have come before it.

That’s the one issue with this show. It doesn’t do anything different. It’s the same kind of shonen story we’ve seen since the golden age of Anime in the late 80s early 90s. I feel if it had come out then, it would have been a classic, but the fact that it barely does anything different is the biggest issue. It’s very clichéd and predictable in a lot of ways.

To add to this, the characters aren’t exactly memorable. A lot of them are hyperactive to the extreme and don’t have a lot of character development. In fact, the personalities are very reminiscent of Fairy Tail, another Fantasy anime. Some are brash, others are tough, some are cruel, others are super serious without any personality or emotion. It doesn’t add anything that hasn’t been done before.

But I do want to get into the two main characters.

This guy seems to be the huge problem with everyone. To start, he’s very loud and super hyperactive. It’s not like anime hasn’t had these characters. Naruto and even Luffy from One Piece often have hyper personalities. But there’s something about Asta that puts me off.

He yells, a lot. Again, nothing new, but he rarely has an indoor voice and even the most mundane tasks, he acts as if his life depended on it. One instance, he’s doing laundry, scrubbing as if he’s fighting the battle of his life. I’m not kidding. Also, while I haven’t watched the subbed version, I hear that the VA is more grating than the dub. His dub voice is great and fits him perfectly, but even the dub, it’s painfully obvious. I wouldn’t mind it if he were sometimes roaring like a loon and sometimes normal. That’s what I like about most shonen characters. They shout, but at times, they’re like any other character.

Second, he’s usually all brawn and little brains. Numerous times the group leader of the Black Bulls, Yami (an aside quick, their logo looks like the logo for the Houston Outlaws of the Overwatch League (See above)), offers Asta and company a mission, while Asta, despite his extreme excitement, has zero idea what it is. It’s usually along the lines of “I can’t want to do X! What’s X?”

Despite the team calling him out for his ignorance, I often hate this trope. I don’t expect the heroes to know everything about their world. Sometimes, it’s so we, the viewers, can learn about it. But him going into a group, aiming to be the Wizard King, and not having any clue about the requirements regarding it is problematic in itself. Current politics aside, imagine having so little knowledge of your goal that you jump head first without having the slightest idea what you’re in for.

Again, I’m not against this as an element, it’s just the series makes it obvious that Asta is extremely clueless in regards to his goal. At least Naruto and Luffy had some idea of what their goals and world were like, even if they knew little about it.

That’s all for Asta, but while I am watching the series on Toonami, I’m half paying attention at this point.

While Asta can be a little agitating at times, Yuno has a different issue, though it’s not as major. He’s good. Like really good. In fact, so good, everyone brings it up any chance they get. He’s from the same village as Asta, and by definition his foster brother, but he’s super gifted. During the magic knights exam, students are elected into whoever the magic knights choose. Either two hands go up, or none at all (the latter being they failed). All of the magic knights go up for Yuno.

He’s not particularly interesting either, yet another issue with this show. He’s calm, quiet and isn’t too emotional. In fact, he doesn’t seem like he cares about anything that much. He’s not an interesting character, but you wouldn’t know it from the promotional art.

Character design and personality seem to be the only issues here. Some of them aren’t memorable, but the two above stand out the most.

I’m often not that negative when it comes to stuff I watch, and I did hear some of the complaints prior to this, but I feel many of them are justified. If this were in the 90s, I felt it would have been a classic, but as far as today, it doesn’t hold me over. The dub is wonderful and definitely holds to Funimation’s excellent standards, but overall, not even a superb dub can save this one.

So yeah, that’s about it. It’s just my thoughts. If you disagree, that’s fine, but I can’t say I’m a fan of this one. That’s how it works, I guess.

One thought on “Fantastic Wonder: Thoughts on Black Clover”