Beyond the Stars is a series of Science Fiction related posts where I discuss different aspects of the genre and the many tropes and plot lines associated with it. Today, I talk about Star Wars: The Last Jedi from Lucasfilm. 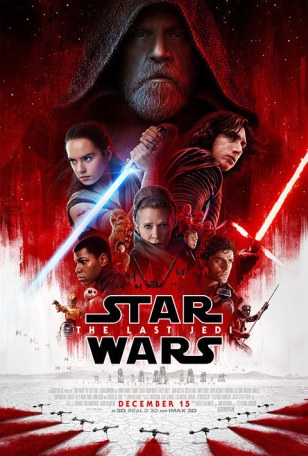 Beyond The Stars: Star Wars: The Last Jedi Review

I sense a disturbance in the force. As if a bunch of nerds kept crying out in agony and refuse to be silenced.

Yep, time to dip our toes in shark infested waters and talk about lightsabers. Having narrowly dodged spoilers somehow, I managed to see the film last weekend and I’m prepared to give my honest thoughts on it. To start, I’m going to get this out of the way and say that while I had some issues with it, I enjoyed it overall.

So I know I usually avoid spoilers out of respect, but I feel this is a rare occasion where I cannot discuss this movie without discussing the climax, because a lot of big things happened in such an, admittedly long, timespan. As a result THIS REVIEW WILL CONTAIN SPOILERS FOR THE FILM. SERIOUSLY, IF YOU DON’T WANT TO BE SPOILED UNTIL THE BLU-RAY COMES OUT, THEN LEAVE NOW. DON’T YELL AT ME BECAUSE I SPOILED IT. =)

The basic plot revolves around two different plots. The first is the rebel forces under the command of Leia trying to escape a series of First Order ships trying to hunt them down. However, that’s easier said than done, since despite numerous warp jumps, the First Order is right behind them. Once they realize this, they discover that they’re low on fuel and another jump would end them. They must stall them in order to survive, and Poe, despite being overconfident enough to waste numerous lives to destroy a dreadnaught, hatches a plan to infiltrate the star destroyer and turn the tide in their favor.

The other half is Rey’s training with Luke, or trying to train it’s her. She’s on a remote island in an earth-like planet in some part of the galaxy. Luke is hesitant at first, refusing to return to the way of the Jedi, but he decides to teach her how to use the Force. However, their training suggests a bad future for Rey, as she nearly succumbed to the dark side without even realizing it.

Both of these storylines take place around the same time. Overall, the plot was very sound. We see a ton of character development from all major characters and we also see friction between the rebellion members. It’s not formulaic in the slightest and every characters gets some spotlight. Rey, Poe, Finn and even Kylo Ren. There are some things, the ending, and the infamous Porgs. I did think the Porgs were adorable, even if they didn’t fully feel Star Wars-ish.

A humorous scene involves Chewbacca eating a cooked Porg, and the other Porgs look on in horror. Chewbacca drives them off, but the Porgs come back, begging him to not eat their friend.

I’ll get to the humor in a bit, and one thing I want to mention is while I did enjoy the movie, I did have some minor issues with it. It’s not perfect, but it’s a very good film. I’ll go into each of the talking points now.

One big moment is the relationship between Kylo and Rey. At first, they sense each other’s presence through the force. It’s hostility at first, but Rey realizes that Kylo could turn to the light side. Their mysterious visions attempt to bring them closer together and allow Rey to convert him.

This gives the first look into Kylo’s history and his relationship between him and Luke. I always felt that Kylo did have a sense of mercy within him, but it’s unclear at the moment what side he’s truly on. His ambitions seem to be bigger than he’s letting on. Snoke’s displeasure with him is also a motive for Kylo Ren to do the unthinkable later on and drive a lightsaber through his body, slicing him in half.

That’s one talking point. Snoke is the primary antagonist and the writers got gutsy and ended him, making Kylo Ren the main villain. The one issue I have is that we don’t know too much of Snoke to get a good thought on him. What was his overall goal? Why did he need Rey so badly? And how did he become the new head of the Sith Empire.

I hope this is answered in Episode IX, but his death left a lot of open questions about him unanswered. Questions we may never get answered aside from expanded material (which wouldn’t be fair in that sense). Either way, that moment did surprise me, but I wished they could have built him up. He could have been an amazing villain, but it felt like wasted potential.

So yeah. This actually happened. First, I’ll explain that Luke’s training with Rey wasn’t without problems for them. Luke was the one who trained Kylo Ren and it throws a bunch of red herrings that Luke sense Kylo was about to turn to the dark side, so Luke attempted to kill him in his sleep and that sent him over fully. According to Luke, however, he did think that, but then he had second thoughts, thinking it wasn’t too late. It was, since Kylo got the wrong message and tried to kill him.

Rey was initially furious about this, since Kylo went through such lengths to admit as much to her that she demanded answers. This was also the first time Rey had hints that she could turn to the dark side, which I’ll get to in a moment.

Towards the end, Luke is with the rebel base on an crystal planet and faces off against Kylo. After the fight, basically trolling Kylo by not actually being there, he uses the last of his Force energy and fades like his masters Obi Wan and Yoda had before (As an aside, Yoda makes an appearance before the big battle).

So one of the biggest Star Wars characters is now dead, the previous one being Han Solo. It’s kind of gutsy to have such classic characters being killed off, but that may be because many of them are old and are here because this is a time skip several years ahead, but it still seems strange seeing the most iconic characters in sci-fi films being taken out one by one.

I know Carrie Fisher played Leia, even after she died (still sad that it happened), but I don’t know what her role will be in Episode IX. I guess we’ll wait and see.

Rey’s Path to the Dark Side?

Another thing of note was that this gave us the first suspicion that Rey might turn to the dark side. There were a few hints prior but this left the door wide open that Rey might one day turn. Her fight with Luke in the rain could have done it as well and I was fully expecting her to join up with Kylo and be part of the First Order (or new first order after both sides were trashed in this conflict).

It’s clear Rey still has some conflicting thoughts, but she doesn’t know how to control it. She’s the first Jedi in a long time, but she could also throw that in the drain and be a sith in the next film. I’m just guessing, but it does point that Rey will have to figure out how to resist the dark side and prove to everyone that she’s a capable Jedi.

I’ve had a few issues with the film overall. To start, I felt the ending dragged on a little. There were a number of moments where I thought the movie would end, but it wasn’t clear how much further we had left. Usually in films, I can tell when it’s close to the end, but I felt the climax, while exciting and suspenseful, went on a little too long.

Speaking of, the whole Finn subplot I felt could have had more purpose. Yes, it was related to blowing up the main ship that chased them, but I felt it was a separate movie altogether, or perhaps an episode to a TV series rather than a movie. I enjoyed the interactions between the Finn and Rose (I think that’s her name. Do correct me if I’m wrong, though), was a nice touch and added character development to both of them.

Also, the humor. It’s was dry, no doubt about it. The beginning sequence alone felt like some bad comedy sketch that felt out of place in Star Wars (Ironically, the Porgs were fine). A few moments I felt (did this need to be in the script). I don’t mind this level of humor (I loved it in the Avengers), but if it’s done poorly (which it was) then it would have made it better.

To give one example, General Hux is trying to get a hold of a rebel soldier. The soldier imitates being cut out and we get into this “do you hear me now” type exchange. I found myself on the verge of facepalming, it was so cheesy.

It’s probably the one thing I’ve criticised so harshly because I don’t mind humor in serious films, but it has to be done properly rather than as a throwaway gag. I can see why people were so divisive over it.

I did have minor issues with it, but aside from that, I felt this was a good film and the intensity of the climax made up for it. Sure it has some questionable and albeit controversial moments, but it doesn’t deserve the axe. Maybe a second watch will get a better opinion. I hope Episode IX can live up to this, and Episode VII was fantastic.

So I do recommend seeing this if you haven’t. If you’re hesitant because of the fan backlash, I’d say give it a shot and then make an opinion for yourself. That’s my thoughts.

That’s all for today. Take care, may the force be with you, and remember, the inn is always open.