Fiction Friday is a series where I talk about what I’ve been reading. Short Stories (and sometimes Novellas) are featured as in-between posts and the first Friday of the month will feature a new novel review. Today, I review Who Won The Battle of Arsia Mons? by Sue Burke. 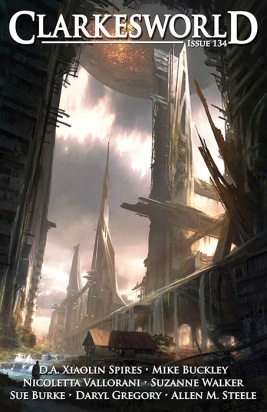 Fiction Friday: Who Won The Battle Of Arsia Mons?

I hope you all had a wonderful Thanksgiving. Time to relax with another story.

So last week, I said I’d review a Novella. A lot of people debate on length, but I consider anything over 10k words to be a Novella. So, that’s what we’re doing. Today’s story is Who Won The Battle Of Arsia Mons? by Sue Burke, as featured in Clarkesworld Magazine. You can find it here. This one is different in that this is a retelling of a fictional conflict inspired by a fictional video game. It’s an interesting tale about a battle upon Mars and the potential future it holds. So let’s begin.

The story is a flashback to a massive conflict that took place on Arsia Mons, on the planet Mars. A fictional game called Mars Robot Melee was a huge hit, much so that it spawned an actual imitation of it that took place on Mars. The game company JAlesine Games wanted to promote their spectacle by having four robotic combatants fight on the faraway planet and duke it out for all of the gaming world to see.

However, the event is filled with controversy, between a bombing, a rogue robot and a plot twist with a meaningful conclusion about preservation for an untouched planet.

I have a soft spot for stories about video games. Being a gamer myself, I couldn’t resist when I saw the first few paragraphs. Most game stories I’ve seen, especially through TV and movies, are a “Hero enters video game world that isn’t actually a game in any way, unless it’s from the 80s, which it usually is” type of plot. Fewer are about actual games and game development. Stories like this should be the standard and it’s what makes me appreciate the gaming community (a little bit. It still has its gripes).

This whole story is a retelling, so none of it is in the present. All of it is recollections of the infamous day and the aftermath. I’ll get into the writing in a little bit, but I loved this story. While yes, I want to follow it in my head a little closely, I can see this as kind of a documentary style, kind of like those History Channel-type shows where people from the event talk about their recollection.

It’s a unique take on storytelling, but I personally would have loved to have seen this play out for real, and then have a reminiscing moment. This story kind of reminds me of that movie “Free To Play,” which focuses on Valve’s DOTA 2 and showcases the lives of three players.

As far as plot goes, I was hooked all the way through. I’m usually hesitant on super long stories, especially if they can’t hook me early on, but this one did. It’s also a good story that celebrates competitive gaming, which I feel with rising popularity, there needs to be more of.

Most characters were minor, but it was the robots themselves that took center stage, so I’ll discuss them.

The first was Fifth Planet Warrior, AKA Hollywood Warrior. This team consists of, of course, Hollywood designers and artists constructing an absurdly over-glorified robot because those people tend to go all out. These guys don’t have as big of a role as the others, but they’re part of the four competitors.

The Second and one of two important robots is River Charles Warrior, owned by the Massachusetts Institute of Technology. I say this is an important robot because a massive attack kills the owners and the robot is left to operate on their own. It adds tension since the robot could cause senseless destruction. After all, Mars is a planet that’s, for the most part, untouched. We’re just now exploring its landscape. To have that destroyed because of a game wouldn’t bode well.

The third is Martian Knight, another important robot and a central role in the climax. It’s a noble warrior who gains sentience through this match and towards the end, becomes one of Mars’s few citizens. This guy shows a good side to AI as a robot that wants to live and explore an undiscovered land and help humanity out. I liked this guy’s story and the ending really gave it a good aspect of what AI can bring, that it’s not all about robots ruling us (though at this point, I’d rather have robots ruling than us).

The final one is Zhongguo Warrior, from China. Since this is based on a video game, their inclusion is appropriate, since they’re such a massive PC gaming market. Having games like League of Legends be their staple, I felt this was a good choice for a fourth character. Many gaming competitions have Chinese or Korean players, and while I’m sure it’s not as big of a deal as I’m making it out to be (we’re a massive gaming market as well), I felt it was a nice touch and a nod to the esports world.

Not much else to add. There were normal humans, but the robots were the main focus and the central characters.

The writing was good, but the structure was one I had mixed feelings on. This was, of course, a retelling of a historic event from the point of view of several characters who took part in this event. I like that idea, but I felt this story could have been more easily told as it was happening in real time. I do understand where the author was going with this, but I’m simply a visual reader. I want to know what’s going on at all times and I want to imagine the scenes in my head as if they’re playing out.

Due to this nature, there was a lot of telling in this story, namely what happened in the past. Again, I understood why the story was written this way, and it’s not easy to make a story like a documentary, but that’s just my thoughts.

Overall, this is a fun read that shows the lengths some game developers will go to promote their game. If you’re a gamer, like me, then you’ll love this story. It’s celebrates gaming, and this author understands us clearly.