Beyond the Stars is a series of Science Fiction related posts where I discuss different aspects of the genre and the many tropes and plot lines associated with it. Today, I talk about the recent Blade Runner sequel in a series of posts focused on the Blade Runner Universe. 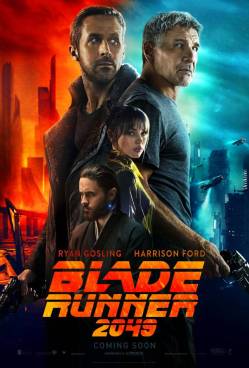 Before we begin, I’ll start by saying that I tend to be apprehensive towards the recent trend of remakes and reboots in Hollywood. Usually, I’m not against the idea in general, but Hollywood has a pretty bad track record of being unable to do better than the original film. So a sequel made 30 years later than the original, I had reserved thoughts.

I’m glad I saw it because I think this might rank as one of the best sequels since The Dark Knight. It’s extremely faithful to the film before it and the storyline I felt was more interesting than the previous one. Everything about it made it one of the best films this year, at least as far as Sci-Fi films went.

The story begins with another monologue where we learn that a lot has changed in the last 30 years. Most notably, Tyrell Corp. has gone under and is replaced with Wallace Corp. The story begins with K (Ryan Gosling’s Character), a replicant Blade Runner, who investigates a replicant who managed to go into hiding. During that time, he uncovers bones in a tree near the plant farm the replicant worked at. The bones have a barcode on them, suggesting that the replicant was born, not made. This naturally stuns the scientists at the idea that a robotic entity can breed.

At home, he interacts with his wife, a hologram person, who thinks, speaks and acts like a real person. Initially, she’s chained to a contraption that allows her to wander the house like a normal person, but K buys her a mod that allowed her to move freely, without any restrictions. This moment was very touching and could point to an interesting future with AI. Sure, she’s not real, but K sees her as such.

Throughout the movie, K investigates the meaning of the code inscribed on the bones. All the while, he gains a sense of humanity when he discovers that his memories aren’t real.

Eventually, he decides to go to the heart of the matter and find a retired Blade Runner, Rick Deckard (Harrison Ford’s character).

I won’t go any further, but the plot was extremely gripping. It continues that crime drama in a sci-fi world. The world is far more advanced now than before, and I’m sure modern day technology like advanced AI had something to do with it. K’s character was the most interesting of all. He’s a replicant (which you have a sense of throughout the movie), but he’s shown to be more emotional than simply being a robot. His wife shows that sense of humanity, where two robotic entities are together like husband and wife, even if they should exist naturally.

I feel the movie worked by having the main character not be human existing in a world they don’t belong in. I doubt this would have worked if it was the other way around. Too many sci-fi works I’ve seen tend to center around humans dealing with robots, never robots dealing with humans. In fact, while at times it’s obvious who’s human and who’s a replicant, there are situations where the villain, Niander Wallace (Jared Leto’s character), has his true motives hidden and is a villain who operates in the background.

I kind of wish Mr. Wallace got more focus as a villain, personality-wise, he’s fantastic, but while it’s clear he’s up to no good, the climax isn’t too reliant on him. Don’t get me wrong, I loved the ending (I won’t spoil it for those who haven’t seen the movie), but I wanted to see more from him.

In any case, I felt this was a fantastic sequel overall and might be the better out of the two. It’s rare I say that because although some sequels are great in their own right, they usually don’t surpass the original. Not only does this do that, but it’s made way later than the original.

What makes it better than the original

As far as it being a sequel, I really thought it was one of the best movie sequels since The Dark Knight. It improves upon the foundation laid before it and doesn’t retread the same exact ground the original did. It’s what a sequel should do. While some might say the movie didn’t need one, having a sequel like this didn’t hurt at all.

Considering Hollywood’s track record, I fully anticipated on so many things going wrong. Sure the trailer didn’t show that, but if I learned anything, even interesting trailers can produce bad movies. It’s how they market. But this is not a bad movie by any means. It serves as a reminder of how good it can be. I feel like the newer generation can enjoy what many in the 80s loved. This is how sequels (especially one made long after the first film) should go. That’s what good movies are. Caring about the source material and staying true to the creator’s vision.

The possibility of future adaptations?

I figured I should at least address that this film didn’t do so well domestically. If I recall, the first film didn’t do so well either and that was considered one of the best Sci-Fi films by critics. I believe overseas sales were stronger, but as far as the future, I honestly can’t say. I mean sure, the first film didn’t do well in the box office and it still got a sequel, but that was because the studios felt like they could gamble now that it’s been around a while. It’s got a dedicated fanbase, but it didn’t seem to be enough.

I’m not saying that future films can’t be made, but if you look at the CGI from the trailer, especially the large holographic woman, this was a huge undertaking to even make. Even K’s wife, who manages to feel like a hologram, must have taken a ton a cash and resources to even make it believable. This kind of film can’t afford to fail. Granted, just because a film flopped doesn’t mean it’s bad. Heck, there are bad films that have done well.

I hope this series does continue, but it might be a while before they make a third film. Who knows, maybe in another 30 years, we’ll see Blade Runner 2079. That’ll be fun seeing in my 60s.

So that’s the duology as it stands. A fantastic sequel that improves upon the original and shows that these kinds of movies can be done if enough care is put into them. Here’s hoping there’s more out of this universe. Next week, I’ll discuss the anime short film, Black Out 2022 and finally, it’s source material the week after.

Comment below what you thought about the movie. I’d love to hear your thoughts.