Fiction Friday is a series where I talk about what I’ve been reading. Short Stories (and sometimes Novellas) are featured as in-between posts and the first Friday of the month will feature a new novel review. Today, I review Star Wars: From A Certain Point of View, a short story anthology from Del Rey Books. 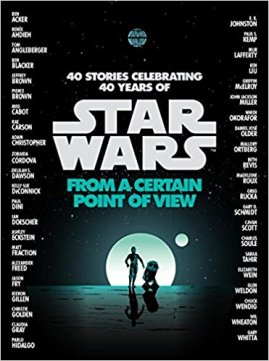 This time, I’m doing something a little different. Instead of doing a novel, I’ll talk about an anthology. Today’s book is Star Wars: From A Certain Point of View. You can find it here. This is a massive collection of short stories based on the Star Wars universe and many of you will find some familiar faces. Wil Wheaton, Chuck Wendig, Nnedi Okorafor, Gary Whitta and Christie Golden to name a few. And that’s not even getting started because there are about forty stories from all different personalities and authors.

This anthology is structured differently than the usual books I’ve discussed, and not because it’s an anthology. It’s structured to mimic the first Star Wars movie: A New Hope, but from the perspective of minor characters; stand-ins watching the famous scenes from their point of view (hence the title). Even if you’ve never seen the movie, like me, it’s an enjoyable read.

Yeah, I should probably get that out of the way, right? I’ve never been too big on Star Wars. I mean, I respect the franchise and appreciate it to this day, but as far as familiarity, I’ve only seen a handful of films. That doesn’t mean I don’t know anything about it. When you think about it, it’s hard not to be familiar with some aspect of Star Wars, even as a non-fan. It’s everywhere, and a lot of series, like Family Guy, for example, have recreated Star Wars in their own unique way.

Now, I’m aware I’d understand the book far better if I saw the film, but I managed to understand it through pop culture alone. Call me whatever you want, but even if I haven’t seen the film and only know it through pop culture, I still saw this book for what it was: a love letter to the Star Wars franchise. And if anything, being a non-fan made me appreciate it enough to make me invested in the universe.

So, instead of a straight-forward review, I’m only going through the stories that stood out to me the most and that I found the most enjoyable out of all of them. And believe it or not, a decent amount stood out to me. For the sake of length, I’ll go over a few of them, so let’s first begin with the stories I liked the most.

The Red One by Rae Carson

This one is a story of an abandoned red droid that ends up in a Sandcrawler on Tatooine hoping to be useful to someone. The droid meets R2-D2 and the two sort of become friends. As they’re being delivered to a farming family, the red droid has to decide if he or R2 is more worthy. It’s an innocent tale where we have a main character with a goal who gives it up for a friend. In this case, when the astromech droid is given to the Skywalker family, he ends up breaking himself to allow R2-D2 to join with them. It’s strange to have such emotional attachments to characters who aren’t human, and this does a good job of making me feel for the two droids and respect how each of the authors can tell a good story with characters you normally wouldn’t spend time with.

This was another interesting story about a Tusken raider named A’koba who is overconfident to a detrimental degree. He thinks highly of himself but is the more level-headed kind of overconfident. As in, he doesn’t like being corrected on something he already knows, especially about his hunting. They attempt to attack Obi-wan, but they back down even when the opportunity is right. It’s a story with a good lesson about when it’s the right time to make a move, or else get yourself killed, even when the opportunity seems perfect. It’s one worth reading and it’s one of my favorites of the bunch, aside from the next one here.

This one is not only my favorite of the bunch, it’s also the longest. It involves the famous sequence with Han and Greedo (you know, who shot first?) and some side characters who are searching for a missing horn that Kabe sold to another individual, which they need to find in order to pay off a debt. It’s a wild goose chase that ends in one of the most hilarious plot twists I’ve seen. It’s one of those stories that when you think about it, could be turned into an animated short. I love stories like this, and seeing it done in Star Wars is equally hilarious.

The Baptist by Nnedi Okorafor

This was a cool story about the monster from the trash compactor scene. Its name is Omi and the beast was kidnapped from her home planet and brought aboard the death star to kill unsuspecting victims. Namely, Luke and the others. All the while, Omi devises an escape plan to return to its homeworld but accepts her new home. It’s an interesting monster tale that gives some insight into a force clearly antagonistic in the movie. The monster isn’t evil, it just wants to be friends. Well, a smack of a laser pistol will set things right, won’t it?

With all seriousness, this was a good story, showcasing that even mindless monsters have feelings is the best part of this story.

There are plenty of other stories, but I won’t go over all of them. It’d take me a long time to discuss all forty of them. Honorable mentions include The Bucket by Christie Golden, An Incident Report by Mallory Ortberg, Of MSE-6 and Men by Glen Weldon, the list goes on. Many of the stories are wonderful and serve as a love letter to the Star Wars Universe. I did have some issues with them, however.

The most obvious is that these stories follow the movie plot from beginning to end. As a result, these stories spent a lot of time on famous and iconic moments way too often. Specifically the Mos Eisley Cantina. There had to be either eight or nine stories set in that place alone, all focusing on the Han and Greedo sequence or anything else of note. It’s definitely a memorable scene, but it drags on way too long and at one point I kind of got sick of it. The cantina was a big place with a lot of characters, but still, they could have given more time to other locations.

Another minor issue is that certain stories are more situation than story. For example, one story titled The Sith Of Datawork is about two workers who discuss how to best report a missing escape pod without Darth Vader getting suspicious. It felt like a good scene, but as it’s own story, it could have had more. Another one is the last one which, although funny, is simply a gag story about how the title scrawl is structured and the strange wording that came with it. Again, it was funny, but it wasn’t a story. There are plenty of good tales in here, but I think that was what we needed to focus on more. Storytelling rather than a single isolated moment that doesn’t advance anything. I’ve seen other short stories do this and it drives me nuts.

While I understand that short stories don’t have the time to have a fully detailed plot, it should still be a story. Have a beginning, middle, and end. That’s how I see short stories. Many of the stories in this are good and others, I felt like they should have added more to it.

Either way, this book was a fantastic read and really feels like Star Wars to me. If you’re a big Star Wars fan, is definitely recommend picking this one up.

This seems like a good entry-level book to the new canon universe. Perhaps I’ll look into those someday, but definitely pick this one up. You won’t be disappointed.

So that’s all for today. I have two books back to back. On November 28th it’s Do Androids Dream of Electric Sheep? By Philip K. Dick, which is the basis for Blade Runner, and the main Fiction Friday Book on December 1st  is a younger Sci-Fi tale. So it’s going to be a double whammy this month.